On Monday, I covered 3 flavors of Alcove Chocolates that I had received as free samples. Today, it’s time to write about another Alcove treat, their Fleur de Pretzel bar. 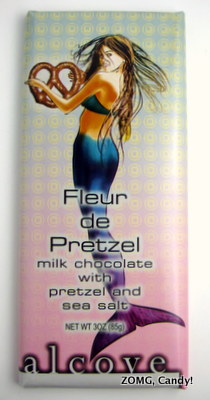 They described it as “rich milk chocolate paired with crunchy new york [sic. They seem to be allergic to the shift key on their website.] pretzels and enrobed in swirls of fleur de sel sea salt.” I didn’t know that crunchy New York pretzels were a thing – I always thought they were soft – but whatever. This bar was awesome.

Unlike the tiles from Monday, I am reviewing the full-sized, 3 oz. version of this beauty. It was segmented into 4 x 5 rectangles and broke easily along the divisions.

The milk chocolate base of this bar was sweet and dusky, with a nice complexity to it. Its matte melty texture was frequently interrupted by crunchy bits of pretzel and sea salt. 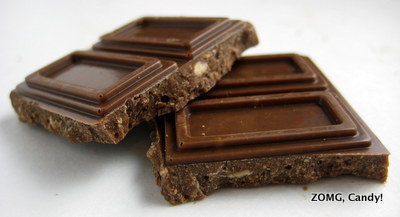 The pretzel nicely balanced out the sweet milk chocolate by adding a darker toastiness that kept it from being cloying. The occasional flashes of salt also helped offset that sweetness while adding flavor and texture interest.

I thought this bar was an excellent bar for snacking. After all, it included a snack food right in the bar. I found it it interesting, well-balanced, and tasty. An OMG.

Edible blown glass made of sugar

Aureole is a restaurant that I will likely never be able to afford to eat at. Thanks to Serious Eats,...