I got this Butter Krak confection from my friend Laurel. I don’t remember where she bought it. I think she mostly bought it because the name’s hilarious.

Neither the wrapper nor the name gave much indication as to exactly what this was. The ingredients list did list “cocoanut”. Typo or purposeful pun?

Zitner’s is an American confectionery company coming out of Philadelphia, Pennsylvania. They have been in operation for almost 100 years creating sweets! However, they are known for their seasonal filled eggs. The eggs come in traditional flavors of marshmallow, peanut butter, buttercream, cocoanut cream, and double coconut, and (of course) butter krak!

So what is a “Butter Krak” egg?

Zitner’s are most known for their Butter Krak eggs, which are dark chocolate logs filled with a coconut and vanilla buttercream. They are only released around Easter-time each year too, making this a seasonal sweet that diehards clamor for. Apparently, they have quite a following. 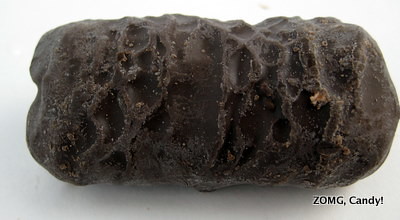 The dark chocolate that made up the shell had bits of coconut mixed in. It was pretty good on its own: a decent depth of chocolate flavor with a sweetly nutty finish.

Unfortunately for the dark chocolate shell, the center filling was a nuclear sugar bomb. It was so sweet that it burned my throat. 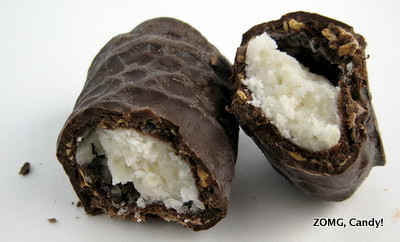 The white filling was basically a butter cream with bits of coconut mixed in. It had a dry, pasty, grainy texture with some chewy coconut flakes mixed in.

There was some nice coconut flavor hidden in there, but the balance was totally wrong. The cloy of the filling totally overwhelmed everything from the coconut to the chocolate shell.

I’m glad Laurel bought this for me. I did eat the whole thing over several sessions and with liberal quantities of water to wash it down, but it’s just too sweet. A —.

If you want a second opinion, Candy Addict reviewed this a few years ago.

Need help finding these out of season? Get in touch!

7 thoughts on “Zitner’s Butter Krak Egg: A Not So Sweet Review”