The World’s Largest Gummi (or Gummy) Worm found its way into my candy stash as a free sample from its makers. At over two feet long (26 inches to be exact), it’s quite a sight to behold. I put some regular gummi worms beside it for comparison.

I’m going to call it the Worm in this review, as it’s spectacular enough to merit capitalization. 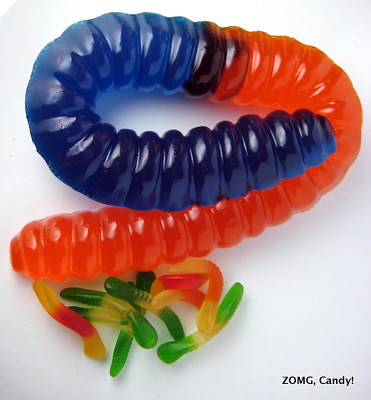 Thanks to its size, girth, and ribbed nature, it’s possibly the most unintentionally adult-looking candy that I’ve ever reviewed.

Actually, based on the YouTube video advertising the Worm, maybe that adult-ness is not so unintentional.

I chose not to just chomp down on the Worm like the guy in the video did. Instead, I tried to slice it like a meatloaf.

It sort of worked… The gummi was so, well, gummi-textured that it didn’t slice that cleanly. To be specific, the gummi’s texture was sticky and squishy. Furthermore, it was a tad moist, lacking the matte outer shell that most gummi worms and gummi bears have. 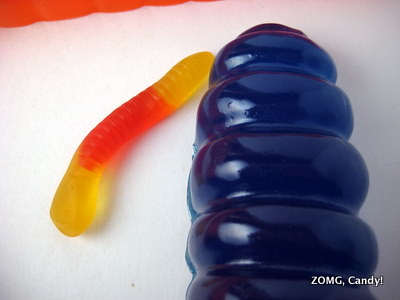 The Worm that I was given to review was orange and blue raspberry flavored. The blue raspberry end tasted like blue Gatorade, with a mellow artificial fruit punch flavor.

Orange tasted quite sweetly and clearly of candy (rather than genuine) orange flavor. It reminded me of Sunny D. 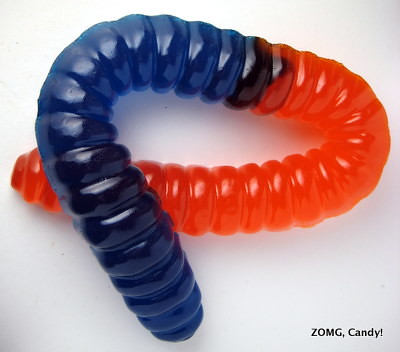 I don’t think it’s fair to assign this a regular review rating – it tasted fine for a gummi, but no one’s buying it for the taste – so I’ll just say that it definitely makes a visual impact. Plus, it’s a big attention getter, which is exactly what you want out of your giant novelty gummis. Up to you if that’s worth your $27.99!