I usually don’t finish the candy that I taste. Instead, I take a few bites and pass the rest on to friends, many of whom are happy to try my candy cast-offs even when my bite marks are on it. They’ll even polish off candy that I personally hated, so I almost never throw anything away. Note the “almost.” I found the Whitman’s Soho chocolates to be too terrible to inflict on my friends and tossed them after I tasted them. Individual, half-eaten chocolates aren’t that great for sharing in the first place, but I’ve done it before when the chocolates’ tastiness overrode the unappealing look of a chocolate with a bite missing. There was no redeeming the Soho line. 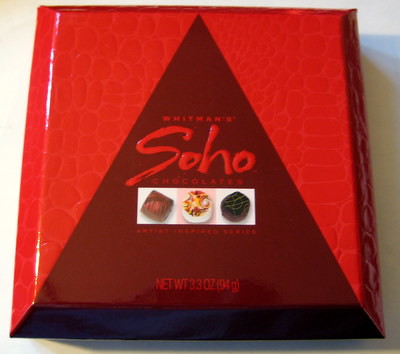 The raspberry ganache, which I believe is the round dark chocolate one with the pretty gold swirls on top, had a creamy “ganache” that was way too sweet and tasted super artificial. I put ganache in quotation marks because the texture was that of a cream. I guess they called it a ganache because that sounds fancier.

The milk chocolate rectangle was pistachio nougat. It had absolutely no pistachio flavor, so I only managed to tell because it had little pieces of pistachio in it. A marvel of chocolate engineering. It just tasted generically sweet. 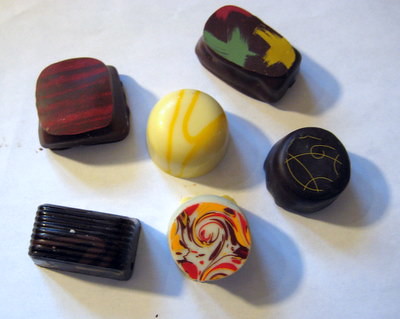 The milk chocolate square was the sea salt caramel, and the only one I managed to finish because it’s hard to make a terrible caramel. It is, however, easy to make a mediocre caramel, which was what this was: blandly sweet and chewy, with no saltiness, no butter or toffee notes, no anything.

I like my notes for the one with the white rounded top: “lemon – sharp acerbic lemon taste with horrific artificial aftertaste. Started out nice but EEK! Run away!” As you can see, there is no lemon flavored one, so I think it’s the pear praline.

The other flavor I was uncertain of was the dark chocolate rectangle. It was sweet and fruity with a slightly smoother, more flowy center than the others. I think it may be the Madagascar vanilla brulee. This one was okay, in that it was inoffensive.

And last but not least, the white, round chocolate with the flat top was the cacao truffle. Another inoffensively boring chocolate with a dry ganache and a slightly fruitiness to the filling that’s probably due to flavor mixing in the box.

I bought these for half off right after Valentine’s Day, and I still want a refund. I think we can extrapolate my notes from the pear praline and give the box a hearty EEK! Run away! They get an A+ for packing but an O (for offensive) for taste.

Thanks to everyone who voted and participated in my Candy Bar Madness Contest! I really like doing candy-related polls, and...