Like all of Vosges’s full-sized bars (at least the one’s that I’ve had), this was segmented into 8 squares, each etched with either “Vosges Haut Chocolat” or a cartoon girl. And like all of their caramel bars that I’ve had, each of those squares was filled with an oozy caramel.

Unfortunately, the bar didn’t easily split along its segments. More often, it broke open across the squares, releasing an oil slick of caramel. It was pretty to look at but left a sticky mess to deal with.

The caramel here was really unusual looking. It was completely opaque and so dark it was nearly black. It was liquid and flowy with no chew or pull. 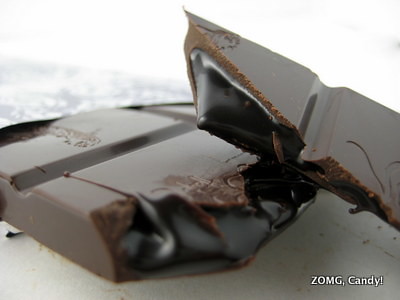 It tasted sweet and smoky with a wheaty beery note from the ale. There was a salty hit to the end. There were no burnt sugar notes that I could detect – they all got swallowed up in the caramel’s sugary sweetness.

The dark chocolate was sweet and softer/less snappy than I would’ve expected for a 70%. It was thick and dark with a nice cocoa depth. 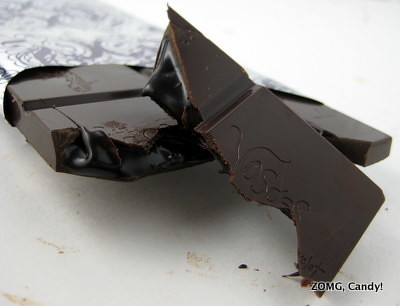 As a whole, the bar was too sweet for me. After a few bites, my throat began to burn.

I took more bites than I normally would have because of the messiness factor – I wanted to leave only sealed squares without exposed caramel, but as I nibbled, it kept splitting open and spilling more caramel. 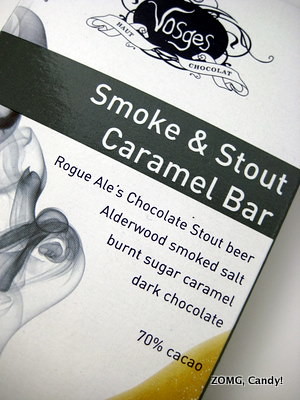 The bar was nice enough, but at its price point, I expected more toffee notes and less mess. It had so much mess! An O.