When I was in Chicago over spring break, I stopped by a Vosges boutique because even though I can’t really afford their products on my college student budget, holy cow are their truffles gooooood. Plus I got permission from my residential college master to pick up another bacon bar for our next tasting. I also got a Calindia Bar because I hadn’t seen that one at Whole Foods or at the Las Vegas Vosges I visited. 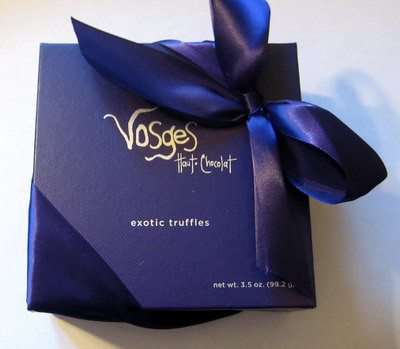 Speaking of the Las Vegas Vosges, I liked the Chicago one much better because they had free samples placed out all over the place. And, after I paid for the two bars I picked out, the saleslady slipped me a little plastic bag of four truffles. I promise, I did not breathe one word of my candy blogging hobby to ingratiate myself with her, though I did ask lots of questions and probably sounded fairly knowledgeable about their line. The truffle freebies were probably near their best-by date, but still, it was a nice and much appreciated gesture.

Another nice Vosges surprise was waiting for me when I got back from break – a press kit containing a library of their mini bars (I already have a set, so I gave those to my suitemates), a box of 9 of their exotic truffles (review to come Wednesday), and a flying chocolate pig made of their bacon chocolate. 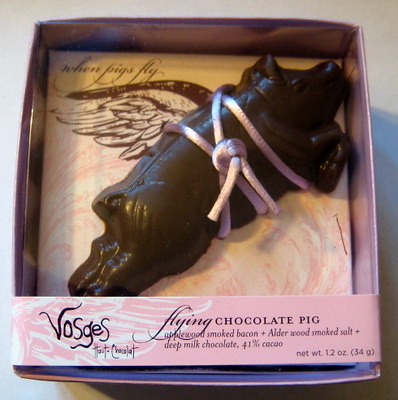 I liked the flying chocolate pig better than their standard Bacon Bar not only because it’s much cuter but also because I’m convinced it actually tastes better. It’s also more expensive though, and it weighs only 1.2 oz. as compared to the 3.0 oz bar.

I found the flavor of bacon to be much stronger in the pig. It certainly smelled stronger. In the case of the pig, the bits of bacon were meatier and chewier than those of the bar, which were crunchier like dried bacon bits. In the case of the pig, I could actually feel the grain of the meat as I ate the chocolate. Because of that, I give the pig an OMG rather the OM I bestowed upon the bar version, though I should note that they may have revamped the way they make their bacon chocolate, so it’s possible the bacon bar has been made just as bacon-y.

I shared some of the pig with my history of food professor, who loved it. I also offered some to my dean, who refused a taste at first, then went back for seconds. If anything, bacon chocolate always makes a splash and is a good conversation piece, making the Flying Chocolate Pig a cute (gag) gift.