The rest of this week will be “chocolate marshmallow cup type candies” week. Let’s kick it off with the Valomilk!

I’ve wanted to try a Valomilk?since I read about it in Steve Almond’s Candyfreak. They’re made by a small family owned company and have probably survived largely on the power of nostalgia. The Valomilks are the most basic of the “chocolate marshmallow cup type candies” that I tried – they’re basically just a chocolate cup filled with marshmallow creme. That marshmallow creme has a tendency to ooze everywhere, making the Valomilk notoriously difficult to travel with.

My Valomilks were surprisingly unmessy, which I actually found a little disappointing after all the mess hype that I read about. When I opened them, only one of the two cups had leaked a tiny bit.

The chocolate was rather bland on its own, but it had a good snap to it. The marshmallow creme was quite sweet and had a sugary grit to it. The texture of the ooze was odd. In some places, it was liquid. In other places, it looked foamy like a marshmallow but was actually sticky. 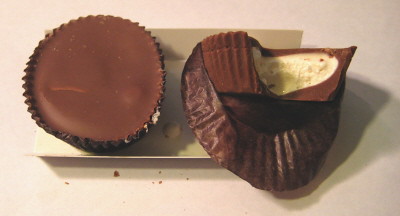 It didn’t exactly flow, perhaps because the weather was on the chilly side when I ate it. The texture reminded me of a water/cornstarch mixture that goes from solid to liquid. As you can see, after I let my bite “sit” for a bit, the ooze got more liquidy. 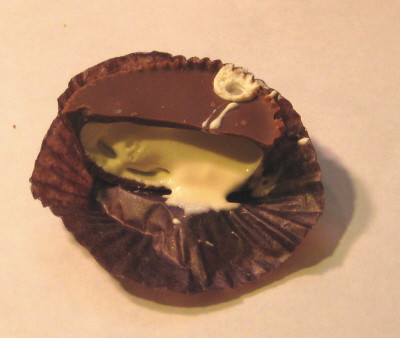 I found this treat fun and unique, and I enjoyed trying it, but I don’t think I’d buy it again. It’s too one dimensional and sugary – an O.

One thought on “Valomilk [Review]”