Today, I start delving into the substantial stash that I picked up in China. First up is two varieties of UHA high concentrated milk candy. I reviewed the original version way back in October of 2007. 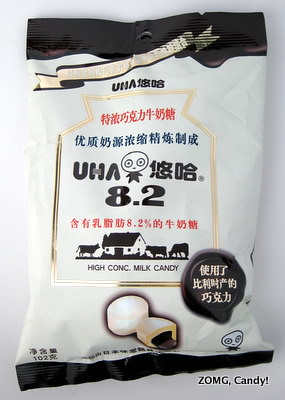 First up, the chocolate version. The front of the bag shows an oozing lozenge-looking thing. The back labels the outside as milk and the inner ooze as chocolate.

The (individually wrapped) candies themselves were actually more like marbles with beveled edges. The hard candy milk portion had lovely cream, dairy, and vanilla high notes. It was like really deliciously fresh vanilla bean ice cream. 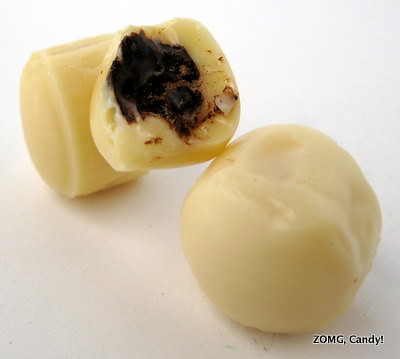 The hard candy had a slippery, glossy melt. It was pretty easy to crack and cleaved cleanly, revealing the chocolate center.

While the chocolate on the wrapper looked oozy, the little dollop of chocolate in the center was solid. Its flavor was just meh – like cocoa powder – but it was a nice surprise. 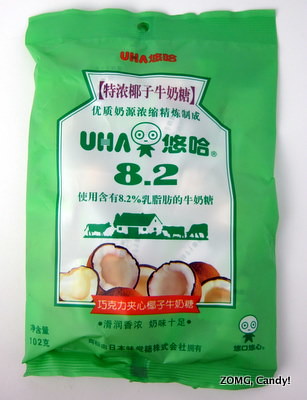 The coconut version had a slightly different texture – it had a softer, satiny mouthfeel. The coconut flavor was immediately noticeable as an airy, fresh nuttiness. Once the outer layer dissolved, the coconut flavor lessened as the creamy milk flavor became more apparent. 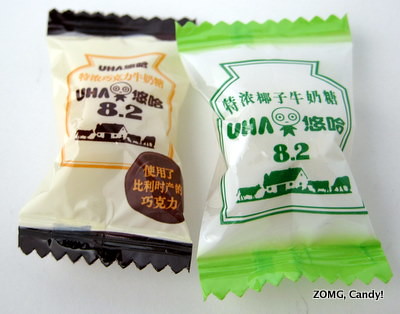 I enjoyed these. They’re a nice departure from the usual fruit-flavored hard candies that we have in the U.S., but I won’t be that crushed when my bags are emptied (partly because I’ve seen the original version in Asian grocery stores in the U.S.). An OM.