After I reviewed Brookside‘s Dark Chocolate Goji with Raspberry, Joanne noted that Trader Joe’s had a candy called Powerberries that was similar. I saw a bag on my latest Trader Joe’s trip and picked it up to see how they compared. 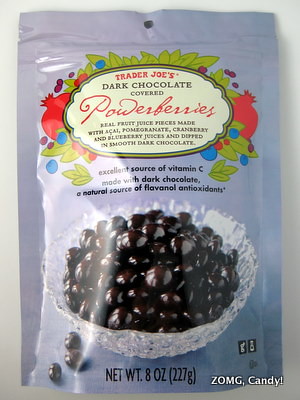 The Powerberries looked similar enough to the Brookside’s from the outside – same stand-up pouch packaging, similar product images, and the same boast of being a “natural source of flavanol antioxidants”.

It was enough to make me wonder if they were made by the same manufacturer (Trader Joe’s does a lot of repackaging). 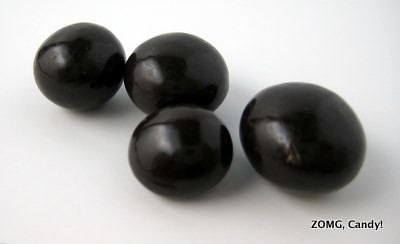 Once I opened the package, however, I noticed a few differences. Though both products were shiny panned chocolate shells around jelly discs, the Powerberries were irregularly sized.

While the Brookside Goji pieces nearly all contained two back to back discs as a center sphere, the Powerberries contained between one and three discs (though most also contained two). 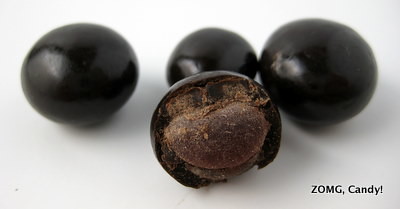 In general, the chocolate layer on the Powerberries was thicker than that on the Brookside, though there was some interpiece variability in both bags. That chocolate had a nice deep cocoa duskiness to it with a little thickness and graininess to the melt.

The discs felt grainy against my tongue. They had an instant jelly give with no chewiness and tasted of strawberry preserves with a deeper blueberry finish. 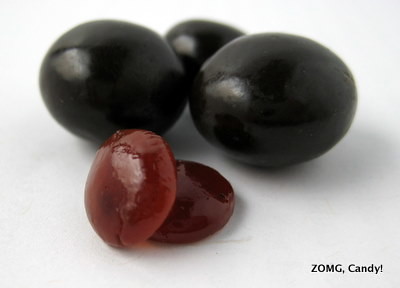 I enjoyed these, but I preferred the Brookside Goji version. Those were brighter and tarter and really let the juice centers sing.

The fruit juice centers of the Powerberries were nice, but they didn’t pop as much, mostly because they had thicker layers of chocolate to fight against. 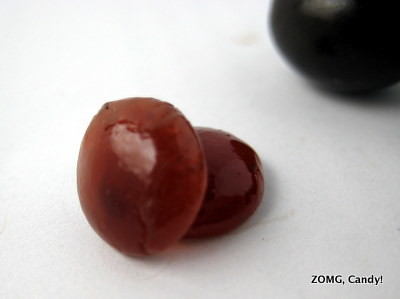 Cybele and Sera have also reviewed these. Cybele and one of her commenters say that they’re the same as Brookside Acai with Blueberry. My guess is that Brookside sells the uniformly sized ones under their own brand, while Trader Joe’s gets the more erratically sized ones to sell.