Trader Joe’s has yet to make it to Rochester, but my boyfriend’s Boston home happens to be just next to one. As Cybele from Candy Blog has shown, Trader Joe’s is a great candy source, so I made sure to pop in when I was Boston to visit my boyfriend. 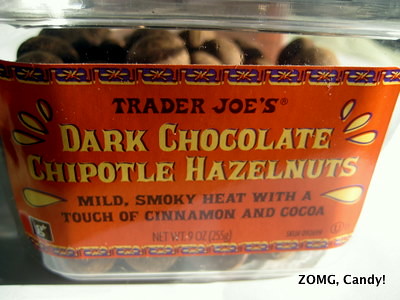 While there, I picked up a tub of their chocolate-covered sunflower seeds (not as good as Sunbursts’s, but still good, and just right for snacking on the long drive home) and these, dark chocolate chipotle hazelnuts.

They’re advertised as “mild, smoky heat with a touch of cinnamon and cocoa”. There’s a lot going on there! 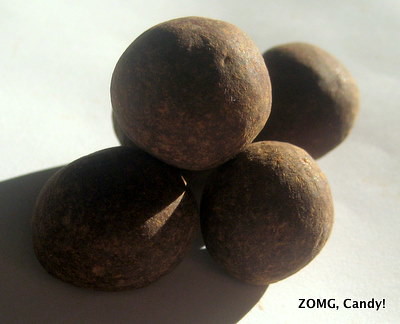 They smell of sweet cocoa. At first taste, it tastes like ground cinnamon – dry and spicy. Next comes the cocoa flavor, which is a tad sweet, along with a bit of nuttiness from the hazelnuts.

Finally, the chili burn emerges after the nut is gone. It emerges slowly, but once it comes, it lingers! It doesn’t hurt exactly; rather, it smolders. It’ll definitely keep you awake!

Texture-wise, the outer chocolate layer is soft, while the whole hazelnut inside is pleasantly crunchy. 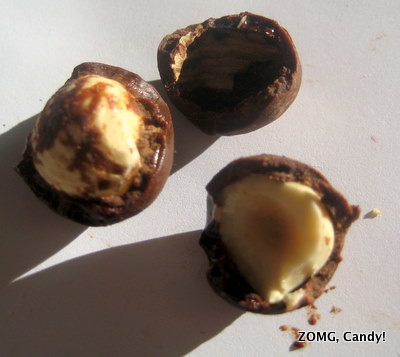 I wish the hazelnut flavor had been stronger. More nuttiness and more roasty-ness would have helped. The chocolate and the chili and the hazelnut sort of works together, but the cinnamon throws it off. Somehow, the flavors just don’t quite mesh.

I wouldn’t buy them again, but I did eat a significant portion of the tub. I’d like to try them without the cinnamon. Maybe they’d work better that way? Until then, an O from me.