In addition to Monday’s Junior Mints Deluxe, Tootsie Roll also sent me a case of their Tootsie Pop Drops. I have a special fondness for Tootsie Pops – I once got a bad case of the flu when I was a kid, and my mom bought me a whole bag of Tootsie Pops to entice me to get better. These days, I’m less into Tootsie Pops, but I still enjoy them. 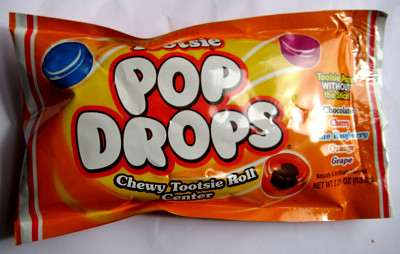 Tootsie Pop Drops are billed as Tootsie Pops without the stick, and that’s pretty much what they are, only they’re smaller than Tootsie Pops without sticks would actually be. They’re little hard candies, about cough drop sized, with a “chewy Tootsie Roll center.” The come in standard Tootsie Pop flavors: chocolate, cherry, blue raspberry, orange, and grape. The first bag I opened had no cherry ones, which is why there are no red drops in the photo below. Incidentally, I’m a big fan of the semi-recent addition of lemon-lime Tootsie Pops and a bit sad that lemon-lime didn’t make it into the Tootsie Pop Drops.

I feel like I’m too inured to Tootsie Pops to really discuss their flavors. Chocolate is a weird pseudo-chocolate, kind of like Tootsie Rolls taste like a weird-pseudo chocolate, but I’m so used to it that I’ll eat it anyway. Orange is sweet and citrusy and my favorite of the bunch, and grape and blue raspberry are just there. I’ll eat them in the Pop Drop form, mostly because they’re in the bag, but I skip them when I pick out Tootsie Pops. 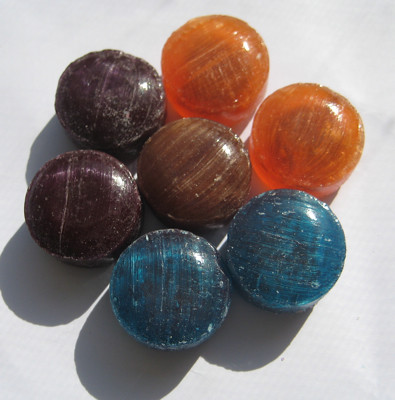 The drops are so small that they’re easy to crunch up, mixing the hard candy shell with the chewy Tootsie Roll innards. I’m an impatient hard candy cruncher, so I liked the Tootsie Pops specifically because they forced you to let the candy melt. While the Pop Drops lose that feature, they are nicely portable and portioned.

These get an O from me, but a nice one. I’m the type who won’t turn down a Tootsie Pop if I come across one in a Kiddie Mix or something, but I won’t seek them out to buy (though that’s mostly because I have so much candy that I only buy candy I’ve never before had).

When I was a kid, I didn't play with Barbies much. It wasn't because my parents were afraid that she'd...