More from my stash of Korean candy, courtesy of Nana and Justin (past hits included Crunky Nude Balls). Nana phonetically translated the title to be “Ti Dui” but doesn’t know what the words actually mean. She also informs me that somewhere on there is a character for flavor, I think under the fruit pictures on the bottom seam.

Thank goodness for pictures. I guessed that these would be like peanut M&Ms, only with lemon, apple, and orange flavored shells, and I guessed right! 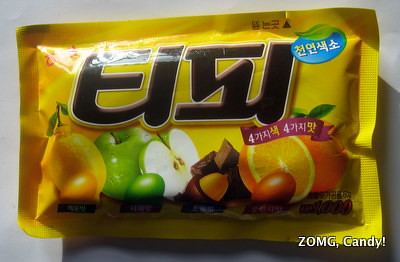 Unlike peanut M&Ms, the peanuts in the Ti Dui tasted unroasted and young (is that the right word for it? They felt like they needed more time to develop their flavors). I did catch one in the package that had some depth and tasted nicely roasty, though I now wonder if it was an anomaly, and I actually just ate a half rancid nut or something.

They come in four colors and flavors. All have a crunchy candy shell (slightly thicker and thus crunchier than M&M shells) around a layer of generic milk chocolate encasing a peanut. I appreciated the earthy color scheme, especially the lovely shade of green. 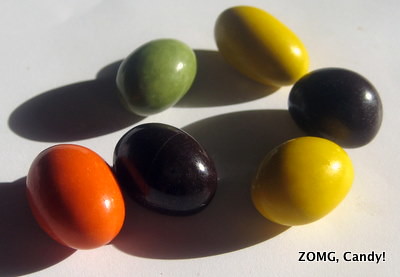 Yellow is lemon. It starts off with a light sweetness, which then becomes a bit tart before the chalky chocolate and peanut flavor come through. The shell alone tastes vaguely sweet but not fruity. For all of these, the fruit flavor is melded into the chocolate, I think.

Orange is orange. It tastes like just plain chocolate up until the finish, which is mellow and round with floral orange notes.

Green is apple. It has an immediate Fuji apple sweetness that reminds of apple Jell-o. It’s too weird for me. As past experience has shown, I do not appreciate the combination of apple and chocolate.

And finally, brown is just chocolate, meaning that it tastes like meh chocolate around a meh peanut for an all around meh-ness.

I give these an O. I’m not sure how much I appreciate the fruit and candy shell and chocolate combination, but I did manage to finish the package over the course of a few weeks, popping a few at a time. I really only found the apple one repelling, and I even ate those eventually. Then again, I did mostly finish them because I’d left the package at my desk, thus keeping them always in sight and in mind. Had I kept them elsewhere, I would’ve forgotten about them, probably.