For most Americans, Terry’s Chocolate Orange is associated with Christmas. Or at least, for me it is. I think they used to run an ad campaign during that time with the tagline of “whack and unwrap” that marketed them as stocking stuffers or something. In the U.K., they’re more ubiquitous and comes without the holiday associations. I found Segsations, individually wrapped chocolate orange segments in a variety of flavors, in my aunt’s parlor. And, of course, I promptly stole one of each. 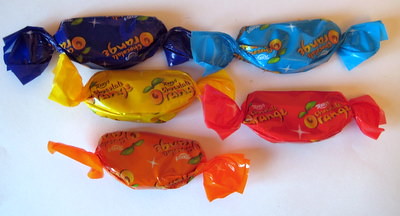 The Segsations come in five variations. Dark blue is “magically milky,” light blue is “crackingly crispy,” yellow is “corkingly crunchy,” red is “devilishly dark,” and orange is “happily honeycombed.” Terry’s clearly wants to make it known that they have mad alliteration skillz.

Magically milky is “delicious milk chocolate flavoured with the essence of real juicy oranges.” I’m assuming these are the standard chocolate orange chocolate segments. They were a quite soft milk chocolate and were lightly tinged with artificial orangeyness. A bit too sweet for my liking.

Happily honeycombed are “milk Terry’s chocolate orange studded with crunchy honeycomb flavour bits.” They had noticeable chunks of something that added a nice honey flavor. I doubt it was actual honeycomb, but it was still nice enough.

I thought Devilishly Dark would be dark chocolate tinged with orange. Not quite. Instead they are, as Terry’s put it in British terms, “a milk chocolate top sitting on a cheeky dark chocolate bottom.” I couldn’t taste much difference between this and the regular milk segment, so it seems that the devilish dark is more appearance than substance. 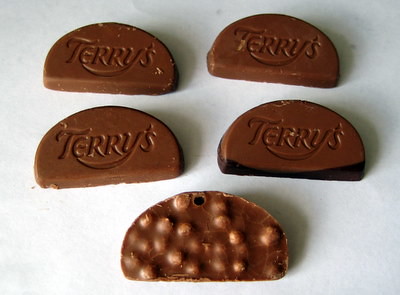 The Cracklingly Crispy, overturned in the above photo, is “packed with lovely light and crispy puffed rice bits.” As you can see, they are indeed pretty packed in there, and the bits do a good job of tempering the sweetness of the milk chocolate and adding a bit of textural pizazz.

Finally, the Corkingly Crunchy, “secretly embedded with little crushed cornflake bits.” Cornflakes as chocolate mix-ins are pretty much unknown in the U.S., and this segment makes it pretty clear why. The bits of cornflake are tiny, flavorless, and barely make a dent in the texture. A little too secretively added, I think.

An O for the Segsations. They’re not bad, and they may make a good “I went to England and brought you this” gift, but I have no desire to try them again.