After my Earth Day round-up of environmentally friendly chocolates left them off, I got an offer to taste some Terra Nostra Organic chocolate, which I eagerly accepted. They sent me a Ricemilk Choco, an Intense Dark, a Double Dark Truffle, a Robust Dark & Roasted Almond, and a Satin Milk Truffle. 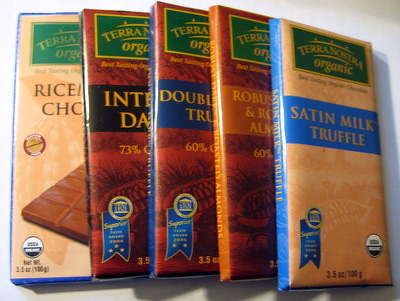 The Ricemilk Choco (below) is made with ricemilk rather than dairy milk, making it gluten and dairy-free for those on special diets. It was the only one of the five to come sealed inside a thin foil wrapper. The melt was quite smooth but neither creamy nor thick on the tongue, and the taste was sweet, but innocuously so. I felt that the ricemilk chocolate had no flavor complexity to it, which made it kind of ho hum. Still, I wouldn’t have known it was made with rice milk, making it a great substitute for milk chocolate. And it was the only bar marked as Equitrade, meaning that they not only pay a living wage but also give back by donating money for literacy or food programs. 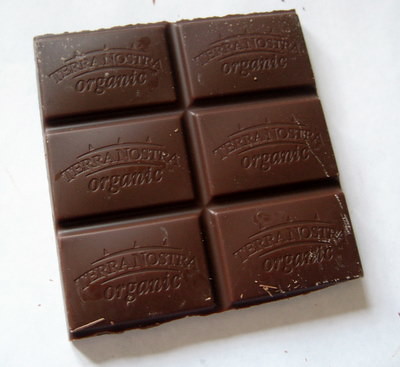 The Satin Milk Truffle (below) was made from 41% cacao, and according to the label, 100% renewable energy. Neat. It was sweet milk chocolate with a slightly darker cocoa center, though I noted no textural difference between the two layers. The melt was thick and wonderfully tongue-coating, but the flavor had a slight, almost sour middle. 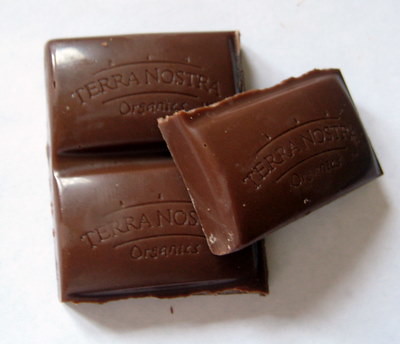 The Double Dark Truffle (60% cacao) was similarly two layered with a less noticeable truffle middle. Visually, it was sort of dull for a 60% cacao bar, but it had the expected sharp snap. Tastewise, I found it to be sweet and floral.

The Intense Dark (73%) had an extremely sharp snap and a fairly dry melt. It was not very sweet and had a slight fruitiness to it. I got a slight duskiness overall, with just a hint of banana to the finish.

The Robust Dark with Roasted Almonds (60% cacao, below) had fresh, nutty almonds evenly distributed throughout the bar, which tempered the sweetness of the chocolate quite well. 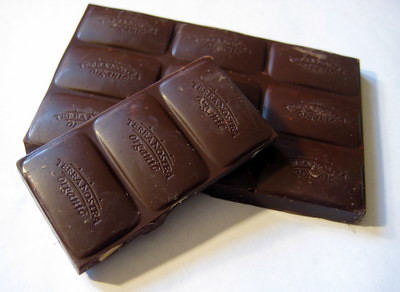 With the exception of the Ricemilk, which I would give an O because I don’t have to eat dairy free chocolate, the rest earn an OMG overall. They make a good snacking/savoring chocolate, but the lack the extreme complexity of the Amano single origin bars that now set the standard for me for tasting chocolate. Still, they get bonus points for being organic and for participating in fair trade and sustainable energy practices, so their borderline OM/OMG gets bumped up to the higher rating.