Taza Chocolate made it onto my radar via my friends Justin and Nana, who highly recommended it. Unfortunately, because they’re a small artisan company, the chocolate isn’t that widely sold in stores, and shipping chocolate gets expensive, so I resigned myself to waiting until the next time I went home (probably after graduation) to try to track it down at an Austin Whole Foods.

Lucky for me, I found some at a local New Haven cheese shop, Caseus, when I popped into pick up some Vosges bars for my next Calhoun College chocolate tasting. They had the 60%, 70%, and 80% bars, but I only bought the latter because, at around $8 a pop, they weren’t cheap (even if it was Calhoun’s money that I was ultimately spending). 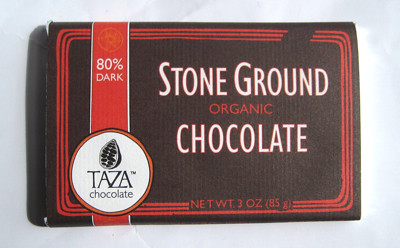 Taza is notable because they’re one of the few U.S. chocolate makers that make their chocolate from bean to bar. They’re also special because the chocolate is stone-ground, which yielded an interesting texture. I found the unusual texture intriguing and novel and interesting.

It was quite grainy, almost crunchy, and the whole thing kind of explodes in a burst of grit after a few chews. Our Associate Master remarked that it would probably make her 5 year-old son cry. Another taster likened the experience to eating sand. I thought the latter characterization was a bit of a stretch, as the grit wasn’t that rough, and I’d happily eat sand if it tasted as good at the Taza bar did.

The bar smells kind of acrid and plasticy – not exactly appetizing. Surprisingly enough, however, it tastes nothing like it smells. It’s actually quite bright and fruity, enjoyably so. Overall, I’d give the bar an OM. I took home the remainder of the bar, and I couldn’t stop popping the pieces because they were so texturally entertaining. I’d give it a higher rating if it weren’t so pricy, but for an organic, artisinal product, you definitely do get whatyou pay for.

Belatedly, via Chocolate Bytes, news that candy giant Cadbury is going Fairtrade, at least for its best-selling Dairy Milk. Score...