This bag of Streit’s Sour Bears caught my eye in a display of Passover foods at Wegmans. They’re imported from Israel and “Kosher for Passover and year round.” 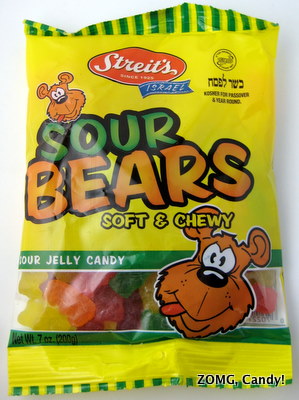 They’re billed as “soft & chewy” and “sour jelly candy”. I expected them to be gummi bears. Instead, their texture was similar to Haribo TropiFrutti, only way better!

The jelly candy was soft with an instant give. It was similar to fruit pate, only smooth rather than lightly grainy. The outer layer had a light stiffness and was softly wrinkly.

Yellow was a bright and sunny lemon. It was sweet with just a little tang and sour all over.

Orange was slightly more bitter at the start. It was tart with a zesty edge – surprisingly complex!

Green was lime, maybe? I didn’t get any lime-specific notes, but it was still nice and bright and tart.

Pink was strawberry, I think. It had the sour overtones of all the Sour Bears but also had nice floral undertones. 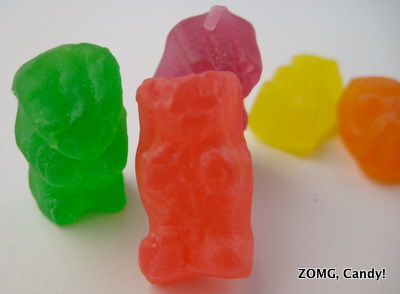 Pinkish purple was the least sour of the lot (and hard to visually distinguish from the pink and the purple). It just tasted sweet and fruity to me. I’d guess cherry, but it was pretty mild if it was cherry.

Last, but definitely not least, was purple. I’m pretty sure it was blackcurrant, which is a great flavor that’s not really used in American candy. It had a touch of edgy bite to it.

How do they taste?

I had low expectations for these candies because the packaging looked so simple and old-fashioned. They totally blew me away with their bright, concentrated flavors and pleasantly soft and buoyant texture.

I couldn’t handle more than ~a dozen in a sitting – the sweetness got overpowering, and I hit sugar overload – but the flavors were so powerful that they were satisfying in small amounts. An OMG.