Starburst Flavor Morph is a new-ish addition to the Starburst line. Cybele covered them back in November, but I didn’t get mine until very recently, both as free samples from CandyFavorites.com and from the press room at Sweets and Snacks. 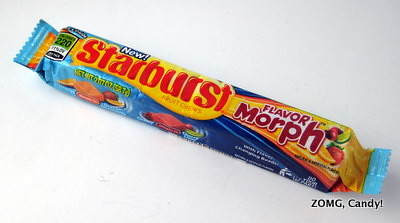 Though they’ve been out for at least six months, my package still called them “New!” It also touted the candy’s “flavor changing beads!”, which made them sound all fancy and technologically advanced. 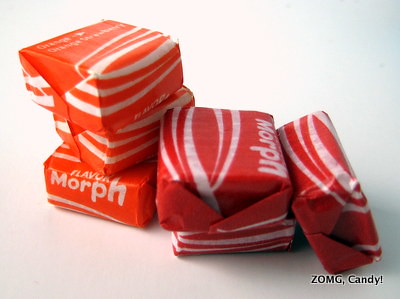 Those flavor changing beads were actually visible in the Starburst square. I could also sometimes feel them in the sticky chew of the Starburst as little hard pellets between my molars.

There were only two flavors in the pack. One was orange that morphed to orange strawberry, and the other was cherry that morphed to cherry lime. It seems like they don’t so much morph as gain a second flavor. 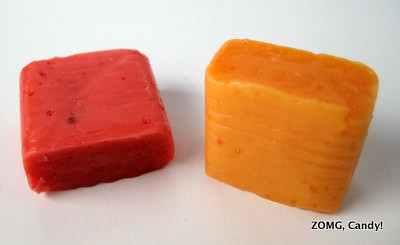 Orange to orange strawberry started off as a much more mild form of the usual orange Starburst flavor. It was not nearly as sour or bright or citrusy.

The strawberry flavor came in quickly and further mellowed the flavor, giving it a slightly plasticky floral edge that finished like strawberry Starburst (the pink ones). 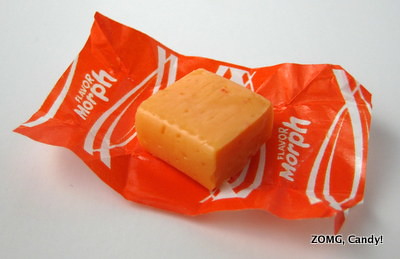 Orange strawberry was a weird combination for me. I think I prefer those flavors separately to them together. An O.

Cherry to cherry lime was much better. It started off like a regular cherry Starburst, with a slight tartness to the start. The lime then came through in a few chews with a strong, limey bite of zestiness. 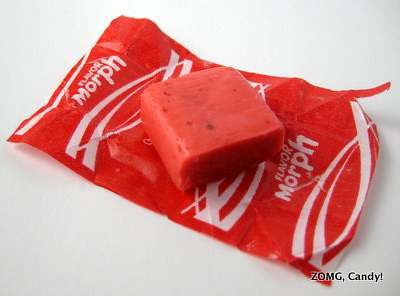 It was like a chewable form of a Sonic cherry limeade. Sort of Shirley Temple-esque, but tangier from the lime. The mix of sweet berry fruitiness and the zesty lime flavor was a winner for me. An OM.