While I spent my spring break in the chilly to frigid northeast, my roommate and other friends went south. I was jealous of their sunshine and tans, but at least my friends were thoughtful enough to bring me candy gifts from their warmer climes! Specifically, I got a box of assorted pralines from one of New Orleans’ candy institutions, Southern Candymakers. 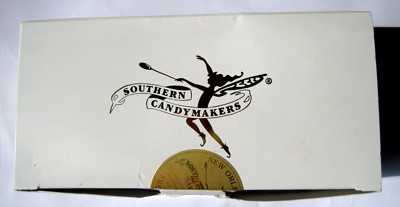 I’d only known of praline as a truffle filling. Since I received this box, I’ve read more about them on Wikipedia. In America, a praline can also refer to candies made from nuts and sugar. In New Orleans, pralines are made with pecans and extra cream. My assorted box included regular, rum, and chocolate pralines made with pecans and a coconut praline with no additional nuts.

They came in a pretty box with nice seal. Unfortunately, either the box was poorly sealed on the bottom or got damaged a bit in transit – the bottom flaps didn’t fully close, and sugar scattered everywhere when I picked it up. That made me sad for two reasons: the resulting mess and the loss of candy! 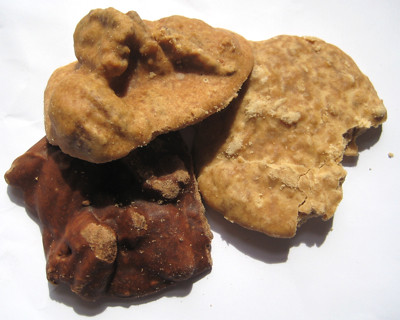 The original praline featured brown sugar and pecans. Depending on the chunk you bite, it’s either a great sugar-coated pecan in which the nutty pecan flavor comes through wonderfully, or it’s pure brown sugar overload.

I originally identified the rum praline as maple. Visually, it looks just like the original, but the sugar has lovely maple notes to it. In fact, I’m not actually sure which praline is which. It could be that this is the original while the brown sugary one is rum. At any rate, I like this one better, as the maple lets the pecan flavor cut through better, and the praline is less cloying overall.

Coconut was basically just brown sugar and coconut. It was dried coconut rather than fresh, but it tasted genuine and was pretty good.

Finally, the chocolate one was my favorite. It doesn’t taste strongly of chocolate, exactly. Instead, it imparts a nice, deep cocoa flavor to the sugar, which really adds to the complexity and makes the praline quite enjoyable.

I give the chocolate an OM. The others get Os. My friends get ZOMG!s for being so thoughtful. And I’ve got a nice case of sugar shock from eating all these pralines.

So in light of recent um... issues... I think it's high time I give my rating system a little tweak....