Today’s review of Sour Patch Kids comes courtesy of Candy Central, who sent me a free 46 oz box of the little buggers to review. For those not good with customary system conversions, that’s nearly 3 pounds! 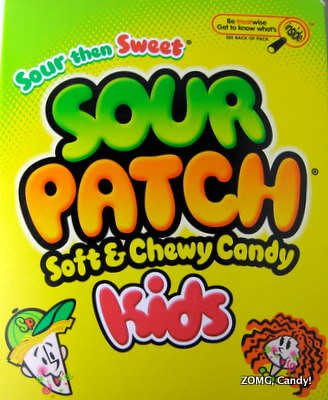 The box is pretty descriptive, calling them both “sour then sweet” and “soft and chewy”. The candies inside were all individually wrapped and came in four colors: red, orange, yellow, and green.

The kids (which were shaped more like asymmetrical bow-ties than humans) were all covered in a granulated sour sugar. They had a soft, immediate give when bitten into, and while they were a tad chewy, they mostly (but not completely) avoided getting stuck in my teeth. 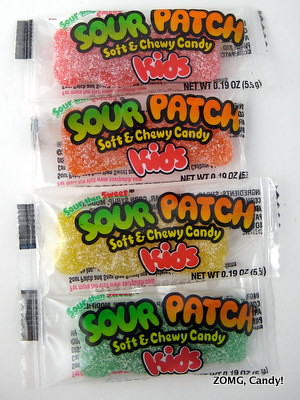 Red was raspberry. I am notoriously bad with artificially flavored red candies, as they all just taste like red to me.

I thought it tasted like cherry with a slight medicinal tinge and an almost plasticky bite to the finish. I thought it was the least sour of the bunch. 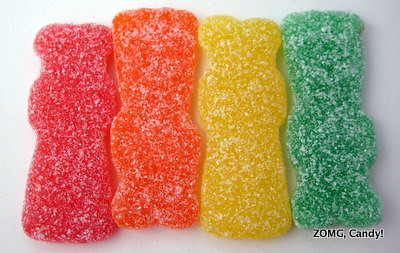 Orange started with a bright initial sting of sour sugar. It had a lovely concentrated orange flavor with loads of citrus zest that then petered out into a sugary sweetness.

Yellow had that same sour kick to start. There was a light lemon-y zest to the flavor but it was mostly a mellow sweetness. 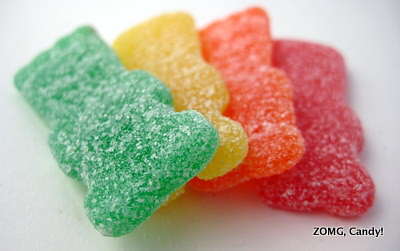 Green is supposed to be lime, but to me, it tasted like candied green apple as soon as it hit my tongue. There was an unfortunate plasticky tinge to the finish that I think was supposed to be the lime flavor. Aside from the aftertaste, the flavor mixed well with the sourness.

While they aren’t my favorite gummi/jelly candy, they’re decently addictive and good for candy snacking and sharing in the office candy bowl. An O.

Many thanks to Cybele for serving as flavor decoding reference.