On Monday, I reviewed Skinny Cow‘s Milk Chocolate Dreamy Clusters. Today, I’m covering their Heavenly Crisp bars in Peanut Butter and Milk Chocolate, which were also free samples from their booth at Sweets and Snacks. 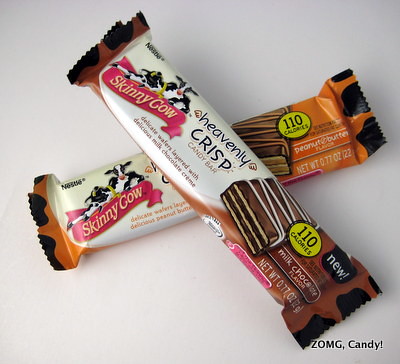 Both bars were 110 calories and described as “delicate wafers layered with delicious milk chocolate creme” or “delicious peanut butter creme”. 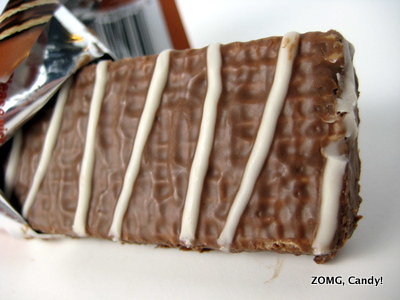 Palm oil appears several times in the ingredient list in various forms, and cocoa butter is completely missing; hence the mockolate designation. They were a mess to unwrap, as the mockolate was all melty and messy, even at room temperature. 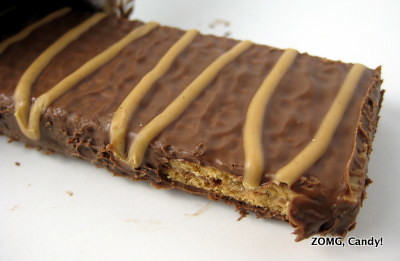 The wafers, at least, were great. They were the lightest, airiest wafers that I’ve ever encountered in candy. Must help keep the calorie count low! They added a pleasant, if flimsy, crunch and a neutral toastiness. 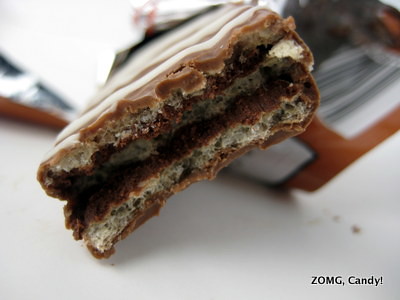 The milk chocolate flavored version did have a nice malty cocoa flavor, likely due to the cocoa powder on the ingredient list. It had a well-balanced, light sweetness that went well with the toasty wafers.

Peanut butter flavor had actual peanuts and added a roasted nutty flavor. It felt a little pastier in my mouth than the chocolate did and didn’t stand up as nicely against the wafers. 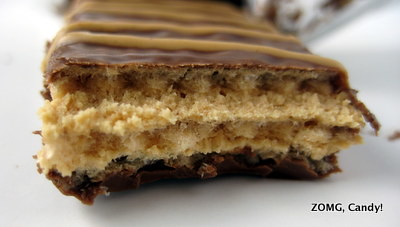 I really like the light crunch of the wafers and how they played off the light sweetness of the other ingredients, but the lack of real chocolate was a bummer that brought these bars down. An O.

You can read Cybele of Candy Blog’s take on these. I agree with her assessment to pass these over in favor of chocolate with you know, actual chocolate.

I swore off watching Project Runway after the judging travesty that was Season 9. It used to be a show...