Ira Glass had a great quote in his recent NY Times interview: “I don’t believe in guilty pleasures, I only believe in pleasures. People who call reading detective fiction or eating dessert a guilty pleasure make me want to puke. Pedophilia is a pleasure a person should have guilt about. Not chocolate.”

I agree with Ira (because we’re on a first name basis, of course) 100%. There’s nothing wrong with enjoying sweets – as long as you’re not eating yourself into a diabetic coma. 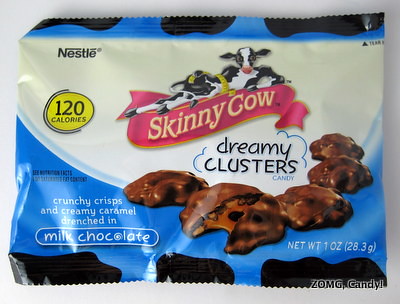 Skinny Cow isn’t as horrible about inducing chocolate shame as other brands have been, but the whole idea of diet candy is still pretty silly. Also what’s up with the name “Skinny Cow”? Are consumers the Cow that wants to be skinny?

The wrapper of this package of Dreamy Clusters, which I got as free samples at Sweets and Snacks, prominently noted that it has 120 calories. It also shows 5 clusters, which is exactly how many were in my pack. 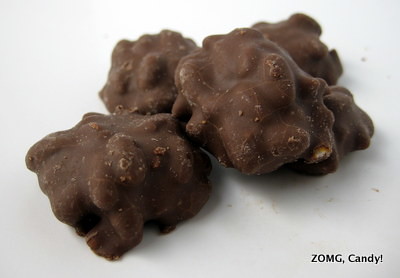 The clusters were described as “crunchy crisps and creamy caramel drenched in milk chocolate.” Each lumpy cluster was between quarter and half-dollar-sized.

The crisps were indeed crunchy. I think they were rice, as rice flour was in the ingredients list, but they were far stiffer and more substantial than any rice crisps I’ve ever had before. 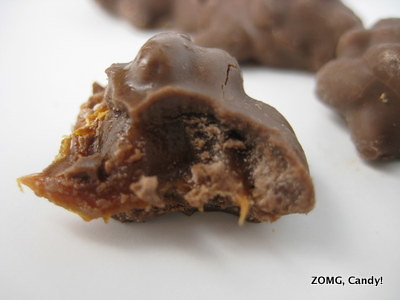 The caramel was chewy but not sticky. You can see from the photo that it had a little stretch but not much pull. It tasted darkly sweet and, though rather one note, was enjoyable enough.

The milk chocolate coating on the clusters was real milk chocolate with actual cocoa butter. Hooray! It was mild and generic tasting, with no notable caramel or dusky cream notes, but again, pleasant enough. 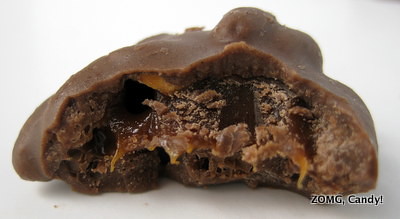 These presented a tasty mix of flavors and textures, like bite-sized 100 Grand bars (which I love). The extra crunchy crisps really elevated these to an OM rating. I think the marketing is dumb, and 5 per pack ain’t much, but portion control is the point here, I suppose.

Candy Blog’s Cybele reviewed the dark chocolate version of these over a year ago.

I got this Sanders Potato Chip Chocolate Bar in my free swag bag at Sweets and Snacks. The chocolate and...