Sesame Snaps are another British treat that I wish was easily available in the U.S. In England, they’re pretty cheap, at 35 pence a pack. Each pack contains two Snaps, and each Snap is about a third the size of a standard Altoids tin (there just happens to be one on my desk; convenient for size reference), only much thinner, maybe half a centimeter thick? They come in plain, chocolate, and yoghurt varieties. I shall review the latter two, as the plain ones didn’t interest me enough to get me to shell out my 35p. 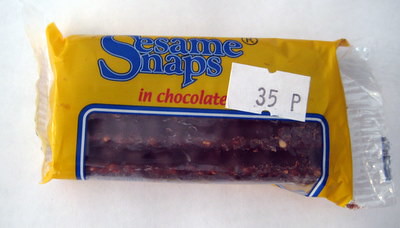 Sesame Snaps are basically a sesame seed brittle – sesame seeds in hard, caramelized sugar. They’re nice and thin, which minimizes the stuck-in-teeth-ness that seeds and brittle inevitably have. The ones “in chocolate” are coated in a thin layer of dark chocolate. It’s not enough chocolate to really get a good flavor profile, especially since the sesame seeds have plenty of flavor on their own, but it does temper the nuttiness of the seeds quite well. This guy was good, if a bit fatty because of the seeds. An OMG. 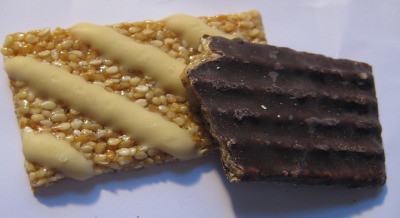 The Sesame Snaps in Yoghurt are the same sesame brittle base but covered in stripes of “yoghurt”. The stripes have the texture of a dried frosting. They remind me of the “milk” in those milk and cereal bars. The yoghurt adds a mild sweetness with just a hint of sour tang while letting the seeds assert themselves more than the chocolate did. I’d give the Snaps in yoghurt an OM, with the caveat that they suffer in immediate comparison to the chocolate covered ones.

Candy Addict also has a review of Sesame Snaps in chocolate, though their’s is of the Canadian version.

3 thoughts on “Sesame Snaps in Chocolate and in Yoghurt”