Happy Friday the 13th! Great time to wrap up a week of See’s reviews (see Monday and Wednesday for previous reviews this See’s week).

I got today’s candies the best possible way: the mall See’s stand had a little basket of individually wrapped candies by the register, and the owner told me to help myself to as many as I wanted. I nabbed a Cafe Latte Krispy and Mint Krispy, along with a Butterscotch Square and Dark Butterchew. 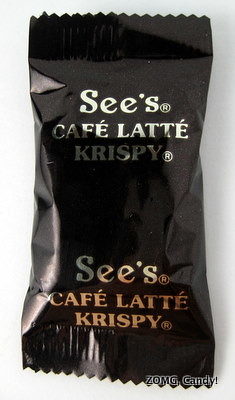 Both pieces were squares of flavored toffee covered with a thin layer of chocolate. The Cafe Latte Krispy was a golden brown coffee toffee hidden in milk chocolate.

The toffee chip cleaved into shards with a great crunch. It had a bit of a tendency to gather as grit in my molars but mostly melted on my tongue.

The thin milk chocolate coating melted thickly and tasted of malt and caramel. The toffee had a nice coffee flavor without any bitterness. Combined with the chocolate, it had a nice mocha frappucino effect.

The toffee crispness kept the whole treat feeling light. It was a nice mix of texture and flavor and OM-worthy. 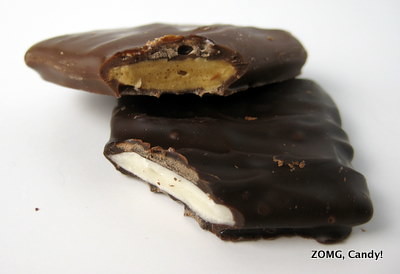 The Mint Krispy was a white mint toffee covered in dark chocolate. The texture of the mint toffee was the same as that of the Cafe Latte: light and crisp. 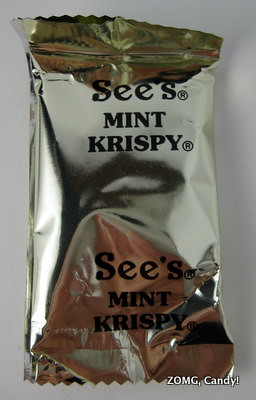 The minty center was powerful in flavor and scent. It tasted strongly of peppermint oil and was nearly spicy in how it set my mouth a-tingling, with just a hint of bitterness to the finish. 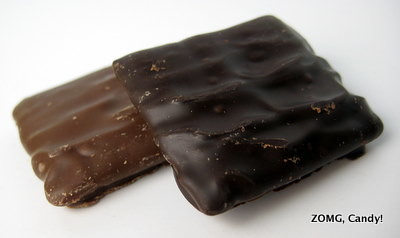 The strength of that mintiness overpowered the dark chocolate, which came through as just a hint of cocoa flavor undertone. I enjoyed the treat but it was too minty. An O.

See’s has long been one of my favorite confectioners for good reason. They make delicious treats at reasonable price points, and they may be enough impetus to get me back to the mall more than once every six months.