Today marks the conclusion of Rosa eats her way through an entire box of See’s on her own because it’s delicious and free. I began my journey on Monday, continued on Wednesday, and today, the finish line is in sight. 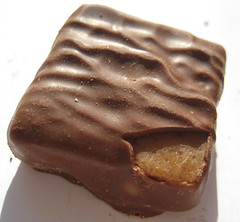 I’m not sure what makes the California Brittle Californian. It’s a hard toffee (with almonds) that’s covered in milk chocolate. Unlike some toffees, this brittle doesn’t really cleave. It kind of just breaks. I could almost feel the tiny air bubbles dissolving on my tongue as I chewed it. The salty almonds go well with the brittle, which was pretty throat-burningly sweet. An O, but a positive one that I can see others enjoying. 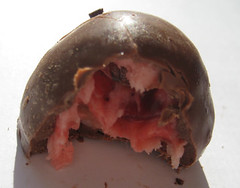 The Mayfair was probably the easiest to identify, at least once I bit into it, because it was shockingly pink. This is described as buttercream with cherries and English walnuts. I don’t care for buttercream chocolates in general because I find them too sweet, and this guy is both too sweet and unappetizingly bursting with artificial cherry flavor. An O. 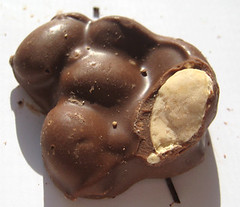 Two of my favorite See’s chocolates were the most simple, the above milk peanuts and the dark almonds (photo here). Good quality roasted nuts plus good quality See’s chocolate makes for yum. Both were great combinations of salty/sweet and melty/creamy/crunchy with toasted nut overtones. I could eat these all day. OMGs for both. 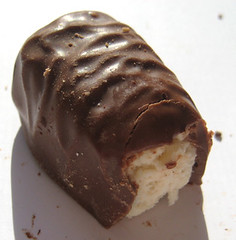 The cocoanut (sic) was milk chocolate around a coconut buttercream. I actively dislike most coconut candies, so to say that I found this tasty is a significant compliment. It had a nice coconut flavor without too much of the shreddy textural issues I have with sugared, dried, and shredded coconut. It helped that the milk chocolate mostly overpowered much of the coconut flavor. An OM. 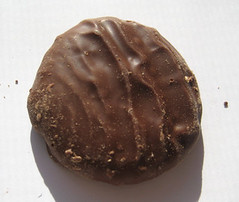 Last up in our pictorial component is the milk pattie, vanilla caramel in milk chocolate. The caramel is soft with a moderate level of chewiness and stickiness. It doesn’t have much flavor that stands up to the milk chocolate, but I did enjoy its dusky finish. I’d love to try the dark version, which may let the caramel assert itself more. An OM.

Finally, I’d like to note two See’s chocolates that I do not have photos for. First, the molasses chips that were in my box got damaged during shipping and ended up in bits and pieces all over the box. I greatly enjoyed picking those pieces out and devouring them. Molasses chips are one of my favorite See’s products. They’re a thin brittle sweetened with honey and molasses and covered in chocolate, and they are divine. They come in dark and milk, and while I prefer the dark, I still love the milk. A ZOMG! for either iteration. You can see them in the below photo of a box I bought myself over a year ago. They’re the four thin rectangles on the left. You can also buy them by themselves, in a mixed assorted box or in milk and dark boxes. 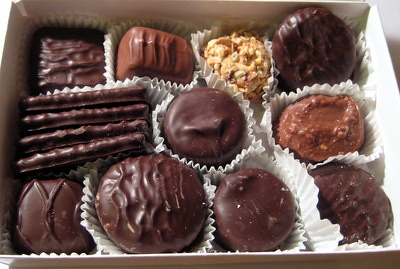 The other See’s chocolate that I do not have a photo of is their Scotchmallow. The Scotchmallow is absolutely, hands-down, my favorite See’s product, and I have no photo of it because I am saving mine for a special occasion. An ex-boyfriend of mine loves them (in fact, he’s the one who introduced me to them), and I knew he really liked me when he was willing to share his beloved Scotchmallows with me. See how seriously I take my Scotchmallows? They’re even at the top of my all-time favorite candies list. 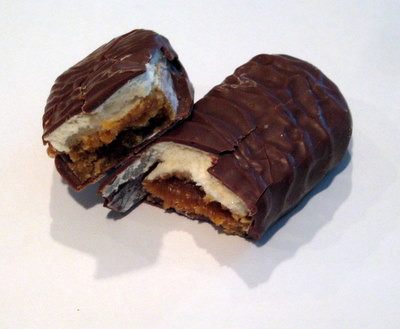 They also come in bar form, as in the photo above, in heart form for Valentine’s Day and in egg form for Easter, but the round chocolate form in their assorted chocolates selection is really the best, I think, as it gets the proportions just right: thick squishy honey marshmallow over a wonderfully butterscotchy caramel, all enrobed in dark chocolate… If you couldn’t see it coming, it gets a ZOMG! like whoa.

So after all this See’s reviewing, what would go in my ideal custom box? At least two sets of dark molasses chips, a set of milk molasses chips, a dark cocoanut, a dark pattie (which I didn’t get to try), a dark almond and a dark peanut, a milk almond and a milk peanut, a caramel with almonds, a couple of marzipans, a dark nougat, a butterscotch square, and fill the rest of the box to the brim with Scotchmallows. The next time I’m in a See’s store, that’ll be exactly what I’ll order (plus a few Scotch kisses, Almond Royals, and Toffee-ettes).

I can’t stress enough how great a value See’s is. They may not be as fancy or as dazzlingly pretty as some of the more expensive chocolates that I’ve tried, but you really can’t beat paying just under $20 a pound for great tasting chocolate. Even I can afford that. And as a bonus, at that price, you don’t feel so bad when you come across one that you don’t love.