Seeds of Change has been making the rounds in the candy blogosphere. They’ve been sending out lots of free samples to promote their nationwide launch of six new flavors of organic chocolate: milk, milk with puffed grains, dark, dark with cherries & vanilla, dark with coconut, and dark with mango & cashew. I got sent free bars of the later four dark bars.

First up is the Dark Chocolate, a 61% cacao that forms the base of the other three. The snap is pretty soft for a dark bar, and its melt was pretty thick, like a dark ganache. It started with deep, dry cocoa flavors that gave way to a lightly sweet finish. Quite pleasant and OM-worthy. 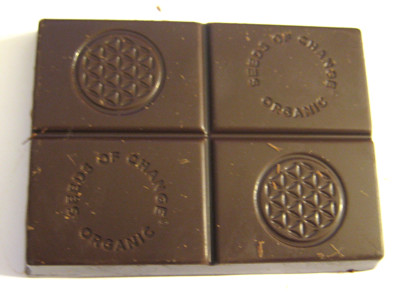 The Dark Chocolate with Cherries and Vanilla had little bits of dried cherry sprinkled throughout the bar. The dried cherry pieces imparted sweet and sour cherry flavors that were quite nice in the creamy chocolate melt. I didn’t pick up blatant vanilla notes but still enjoyed the bar. Another OM. 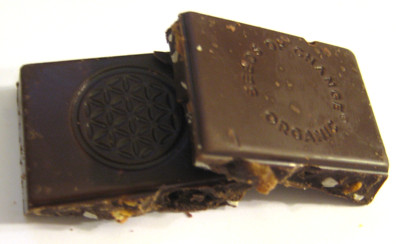 Dark Chocolate with Mango and Cashew (above) was… interesting. Mango and cashew isn’t a standard flavor combination to me, especially with chocolate, though it could be common in another culture for all I know. Unlike in the cherries and vanilla bar, the dried fruit here doesn’t add any significant mango flavors, though there is a bit of a chewiness to the bits. Similarly, the tiny cashew bits add a light crunch but not much nuttiness. Just an O. 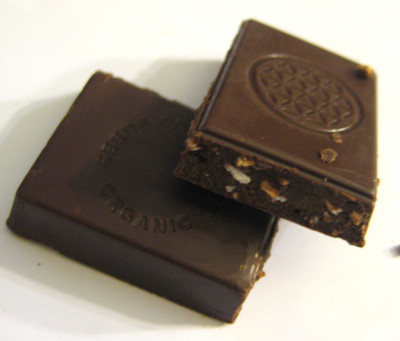 All in all, a nice line of certified organic chocolate bars. I liked the simpler flavors, while the more complex bars didn’t work for me, though I did appreciate the effort.

If you’d also like to try the bars for free, you can enter their “Change Tastes Good” contest. The grand prize winner will get a year’s supply of Seeds of Change bars, which works out to three per day – even I don’t eat that much chocolate! To enter, visit their website and submit a video, photo, or story about what you’ve done to help the Earth by July 31st.