I got this Sanders Potato Chip Chocolate Bar in my free swag bag at Sweets and Snacks. The chocolate and potato chip combo has been dancing around the edges of trendy foodism for a while now, but seeing it in a brand like Sanders that has fairly wide distribution (they’re sold at Duke’s hospital gift shop) was still a bit of a surprise. 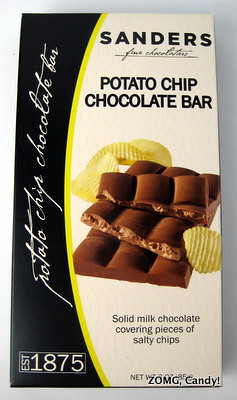 The bar was described as “solid milk chocolate covering bits of salty chips.” The chips depicted on the packaging looked like plain Ruffles-type chips: your standard salted, deep-fried, ruffle-cut chips.

I generally don’t care for such plain chips in my snacking, but I was happy to eat them buried in chocolate. The ruffle-cut style should have been a good choice too, as they tend to be more substantial than their regular straight-sliced brethren. 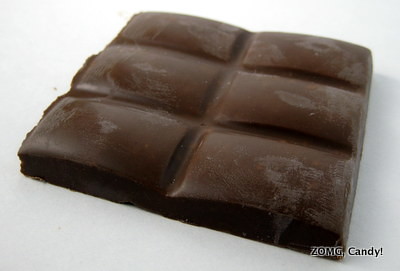 The bar itself was molded so that it was lightly scored into segments. Though the top was smooth, little bits of chips were visible if you turned the bar over. 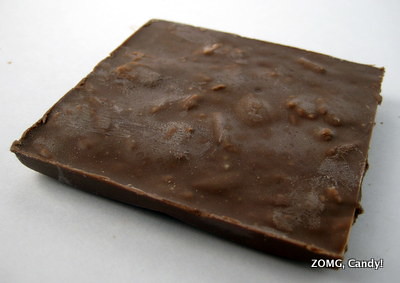 The milk chocolate was creamy with a dusky finish and a slightly sour tinge. The crunchy bits of chips added some texture to contrast with the creaminess…

but they didn’t contribute enough flavor! I wanted more potato-ness, more starchiness, and definitely more salt. Salt + chocolate is a great combination, and chocolate-covered potato chips are a great sweet and salty snack, but Sanders take was underwhelming. 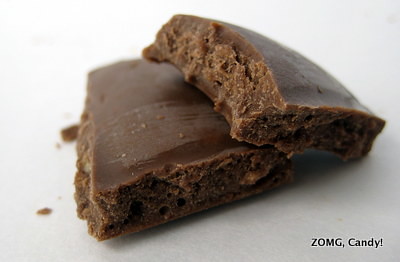 It needed to push the envelope more on the potato chip side. The potato chips were the selling point here, and that point was far too tentatively executed. An O, and a lost opportunity.