I’ve reviewed a few Sanders treats on this blog already, including some of their individually wrapped Favorites that Duke’s hospital sells in its gift shop. I snagged what I believe is the rest of the line at Sweets and Snacks back in May and tasted them last November (hence the slight bloom on the dark chocolates). 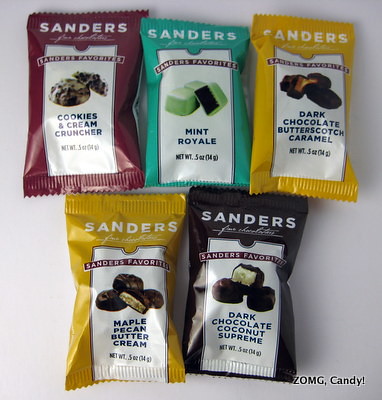 Maple Pecan Butter Cream was the only milk chocolate of the five. That milk chocolate covered a maple-flavored buttercream that was full of chopped pecans.

I found it to be absurdly overly sweet. The sweetness tasted of maple syrup and brown sugar, and holy cow was it overpowering. 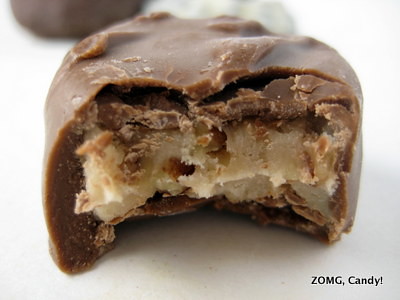 A few notes of caramel and cocoa from the chocolate and nuttiness from the pecan bits valiantly struggled to be noticed. If you like pecan (pronounced pee-can, of course, not puh-kahn) pie, you’d like this.

For me, way too sweet. It made my teeth itch.

Dark Chocolate Coconut Supreme was Sanders’ version of a Mounds. It had a thick dark chocolate shell around a dry coconut center. 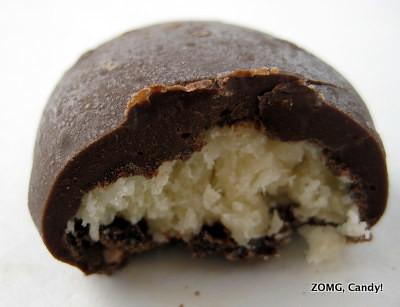 I appreciated the greater amount of dark chocolate here (oodles more compared to Mounds), as that chocolate had a nicely mild cocoa finish, but I thought the coconut center could’ve used more oomph. It lacked nuttiness and had only a light coconut flavor.

Caramel Butterscotch was a chewy, sticky caramel inside a snappy dark chocolate shell. The caramel was sweet and buttery, and though I didn’t get the candied flavor of butterscotch, exactly, it was a still a nice mix of chocolate and caramel. 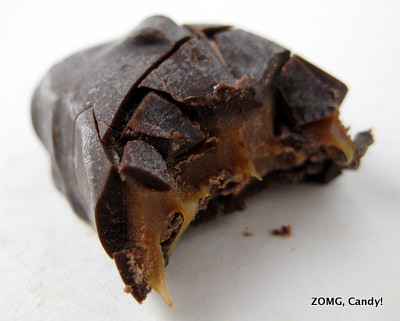 Cookies and Cream Cruncher was a disk of “ivory confectioners coating” full of little beads of chocolate cookie. It was certainly crunchy, thanks to the high density of the Oreo-flavored cookies. 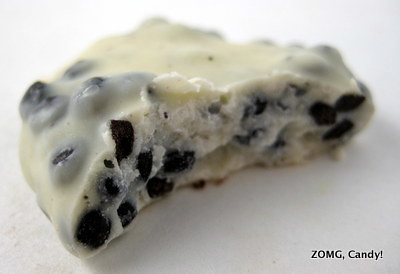 The fake white chocolate was throat-burningly sweet. It tasted super artificial, like canned vanilla frosting, and was made of palm kernel oil. Thumbs down.

Finally, Mint Royale was the most strikingly colored of the bunch: a bright pastel green with a dark chocolate cocoa center. It snapped when I bit into it but also had a smooth and creamy melt. 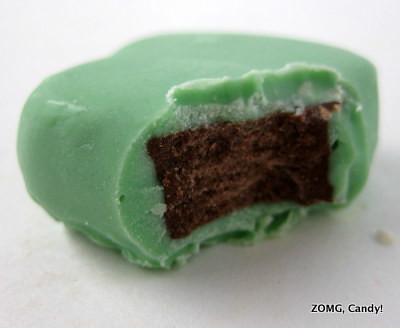 The whole thing reminded me of mint nonpareils but with more chocolate flavor. The mintiness was mild with cocoa undertones – too mild, I thought. For something called a Mint Royale, it really needed to go for broke on the mintiness. 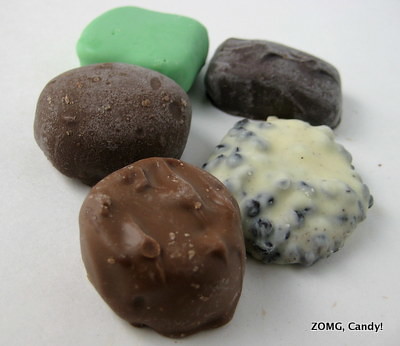 The Caramel Butterscotch is the only one of these that I’d want to buy and eat again, so it gets an OM. The rest were generally too sweet and/or not flavorful enough, so they get Os.

Hi readers, Happy holidays! I'm taking a hiatus through the holiday season. See y'all in 2013! In the meantime, I've...