Now that I’m living off campus, I’m no longer on a meal plan, which means I buy my own groceries and, presumably, cook for myself. Because I’m a po’ college student, shopping for my own food has meant buying extra when things are on sale, clipping coupons, and getting acquainted with store brand products (many of whom are secretly identical or virtually to name brand things; much of the savings comes from not spending heavily on advertising) to save money. When I spent last summer in England, all that was doubly true since everything there costs twice as much. And so, without further ado, I present to you part I of a round-up of Sainsbury’s brand chocolates. Today, we Taste the Difference. 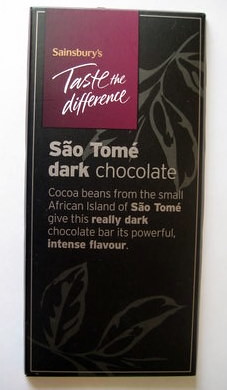 I was tickled to find that Sainbury’s store brand was hoity-toity enough to jump on the single-origin bandwagon. It’s the only generic single-origin bar I’ve seen so far. I also appreciated the pretty appearance of the bar, which was scored into sections for easy portioning and stamped with a pretty fleur-de-lis design offset by diagonal etches. 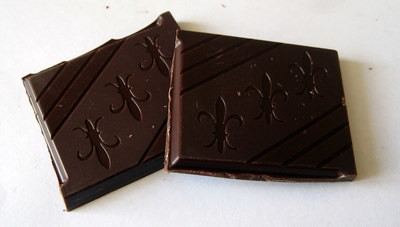 In addition to its pretty design, the chocolate itself was lovely to look at, with an admirable sheen and color. At 72% cacao, this bar had the expected sharp snap. It’s flavor profile was on the sweet side for a dark bar, and it had a sour/sweet finish, somewhat reminiscent of cherries. 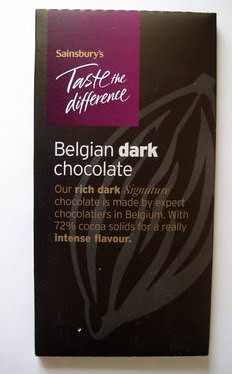 In my mind, Belgium is famous for a few things: sabots (wooden clogs; in introductory French, we sang a song about them, the only line of which I can still remember is “avec mes sabots” and which is now on lopp in my head), getting trampled in WWII, and chocolate. Slap the word Belgian in front of chocolate, and you get all kinds of happy, high-end associations. Sainsbury’s Belgian bar was a 72%, like its Sao Tome, but the two had significant taste differences. So yay! Sainsbury’s wasn’t sneakily making one type of chocolate and packaging it as two! 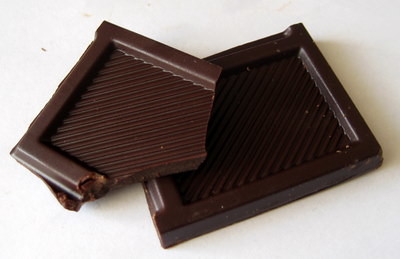 The Belgian dark was quite creamy for its high cacao percentage. Unlike the fruitier Sao Tome, this bar had more of a dusky cocoa-ness to its flavor. And it wasn’t nearly as pretty as its single-origin counterpart, though it also came in a flimsier wrapper, making me think that I caught the two bars in between a production/packaging switch.

I’d give these two bars an OM. As far as flavor complexity goes, they’re not astoundingly intriguing, but they’re nice enough for snacking or even a low-key chocolate tasting. I’m not lamenting the fact that I can’t easily get them in the States, but if I ever get to go back to England, I’d buy them again.