This Russell Stover S’More was yet another free sample snagged at Sweets and Snacks (get used to that opening line, folks. I got enough candy stashed from the Expo to wait out the zombie apocalypse). 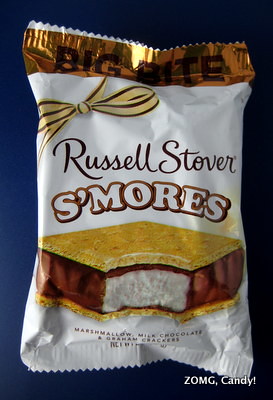 S’mores was a weirdly big thing at the Expo. This was the only fully assembled s’more that I saw, but there were s’more flavored goodies and quite a few companies selling s’mores kits, which were basically a pre-packaged bundle of long sticks, marshmallows, graham crackers, and chocolate.

Part of me wanted to roll my eyes and go, “Seriously? We need someone to further process and package our processed and packaged food?” But another part of me thought, “For a real camping trip, I guess it would be better than carrying around a whole box of graham crackers and a whole bag of marshmallows.” 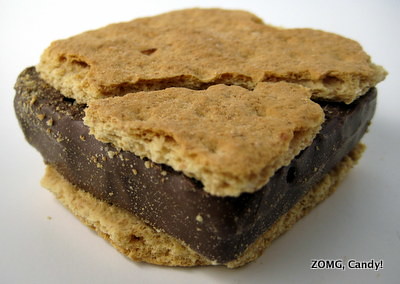 Aaaand end tangent; back to the candy! This thing was pretty cool: a marshmallow square covered in milk chocolate and sandwiched between two graham cracker squares. All the ingredients in real s’mores, minus the toasting.

It wasn’t the easiest thing to transport. As you can imagine, the combination of crunchy cookie and light marshmallow made for easy squashing. My crackers had picked up a few breaks by the time I got it back to Durham. 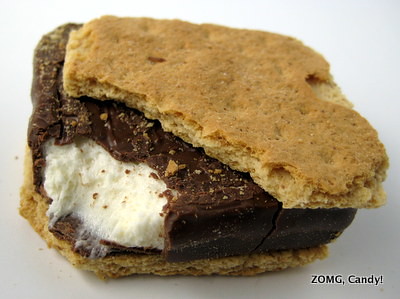 Alas, those crackers had gone stale by the time I tasted this treat, so the texture was a bit off. Surprisingly enough, I didn’t mind that too much, as the staleness was masked when it was all chomped up along with the chocolate and marshmallow.

The cracker had a decent flavor of sweet, toasty graham crackers. The flavor was a bit one-dimensional, and I found myself wishing for some highlights of honey, but it was good enough. Still, I wouldn’t recommend eating the graham cracker portion alone in its stale state.

The milk chocolate coating was thin on the marshmallow but thick in its melt with a slightly sour tinge. Classic Hershey’s-esque flavor profile there. 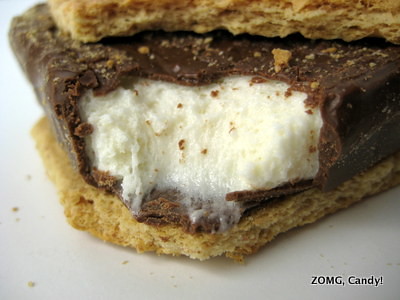 The marshmallow was lightly chewy and squishy and fluffy, with an oozingly long pull when I bit into it and drew it away from my mouth. It tasted entirely of sugary sweetness. Though I missed the toastiness of real s’mores’ marshmallows, I was thankful they didn’t include some sort of artificial flavoring to fake the toasties.

Though I found the marshmallow to be too sweet by itself, the graham cracker did an excellent job of toning down that sweetness, and the chocolate worked to tie everything together. I really enjoyed the mix of flavors and textures here.

I found myself on the fence on whether to give this an O or an OM. None of the ingredients on their own were particularly transcendent, but together, they worked. In the end, I think my appreciation for Russell Stover’s creativity and ingenuity wins out, so an OM.