I bought this roll of Fruit Pastilles at the same time I bought a roll of Maynard’s Wine Gums. I wish I could report that these were better than the wine gums in roll form, but alas, I found them similarly uninspiring.

The Fruit Pastilles boasted 25% fruit juice. Now. I wonder what they used to use. Then again, probably best to not think about that. Fruit Pastilles area soft gummi covered in granulated sugar. They were softer than a springy Haribo and less rubbery but were still pretty stiff.

I had three flavors in my roll. Purple was blackcurrant, I think. Blackcurrant is a lovely flavor that I’m quite fond of. The British are fond of it too, but it hasn’t caught on here in the states. It’s sort of like raspberry and grape and blueberry all mixed together, but, in candy form, it doesn’t carry that nasty olfactory seedy aftertaste of raspberry that I can’t stand. Here it was okay, but other candies have done blackcurrant better. 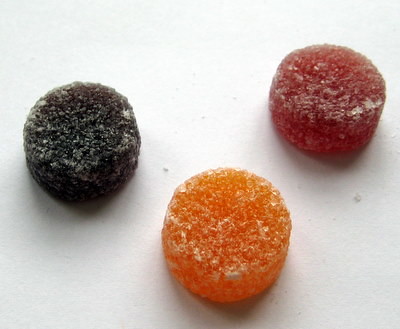 I sometimes have a hard time tasting the difference between strawberry and cherry candies. They just meld into “red” in my mind. I’m pretty sure the red Fruit Pastille wasn’t cherry, so I guess it was strawberry, especially since there’s a strawberry on the wrapper. Clearly it wasn’t a very genuine fruit flavor. Meh.

Here’s where my tasting notes confuse me. I write about the yellow one – definitely lemon, a way too sweetly artificial lemon that had a weird aftertaste – but it looks orange in the picture. I guess that must have been a by-product of my amateur attempt to color correct the photos I took in unideal lighting in England. The purple almost looks black, and the red is nearly purple, so I’m going to trust my notes over the photo.