This Ritter Sport Wild Berry Yogurt was the second of Ritter’s three limited edition summer flavors that I found while abroad (I reviewed the first, Peach-Passionfruit Yogurt, on Monday). 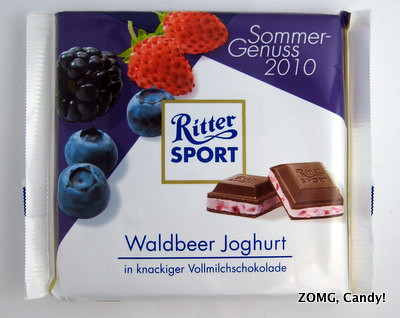 The Wildberry Yogurt bar had a milk chocolate coating with a mixed berry yogurt filling, both of which gave the bar a soft break. I loved the color combination that resulted – mottled pink-purple within a luxurious cocoa brown!

Like the Peach-Passionfruit Yogurt bar, Wildberry Yogurt was also studded with bits of toasted rice crisps. You can see the edge of one in the right corner of the photo below, and you can also see a real berry seed near the break!

The bar itself smelled spot on like berry yogurt. The filling carried a light yogurt tang, but it was mostly dominated by a strong berry fruitiness.

The wildberry mix finished with the complex mellowness of blueberries. I was impressed at how well they’d captured that. It probably helped that Ritter put real berry bits in there. 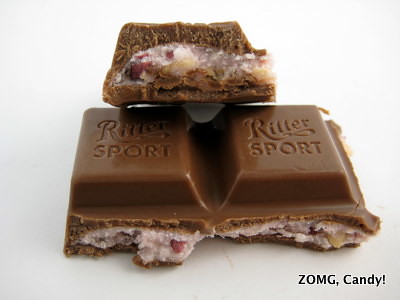 While I enjoyed the bar, I found it to be a tad too sweet for my taste. If Ritter Sport would turn down the saccharine just a notch, it would be perfect. As is, an OM.

The 2009 version of this was also reviewed by Jim last year.