This is the last of Ritter Sports’ 2010 summer flavors that I picked up in Europe. The other two, Peach-Passionfruit Yogurt and Wildberry Yogurt, were reviewed earlier in the week.

Stracciatella is a flavor of Italian gelato that’s analogous to chocolate chip ice cream. I have to admit I didn’t try stracciatella gelato while I was in Italy – I was too busy eating yogurt gelato! 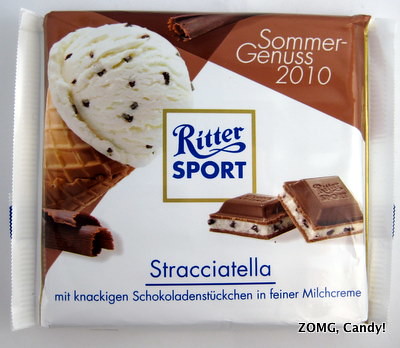 This bar was milk chocolate with a creamy white filling that was studded with bits of black/brown chocolate. It was quite pliant with a soft break.

The milk chocolate was rich and sweet. That white filling started out sweet and creamy, then developed into a more complex vanilla bean flavor with an almost nutty coffee-tinged finish. I also caught a slight tang in the flavor profile. 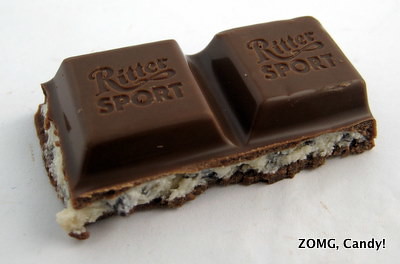 I thought that the bits of chocolate in the filling would provide a textural contrast of either hard chocolate or crunchy cookie bits. It didn’t, as my filling was uniformly smooth.

No matter – this bar was delicious. The filling had a well-developed complexity that was intriguing and tasty. I wish this were available in the US – along with yogurt gelato! An OMG.

Jim’s also reviewed this bar, this year this time. It’s apparently brand new for 2010, and I hope Ritter Sport has the sense to bring it back next year or to promote it to a full-time bar.