This Ritter Sport Butter Biscuit was one of the more… inane purchases that I picked up in Spain. Ritter Sport bars are pretty easy to find in the States, but they usually run $2.50 and up, and this guy was only a Euro, so I bought it (and another one that I’ll review later) to save a buck.

I carted it around Spain and flew it to Boston. Then I realized that bringing it home to Austin, Texas in the summer was a terrible idea, so I left it in Boston in the capable care of my boyfriend (he doesn’t eat candy. I know, it’s weird that we still manage to get along) and made him bring it to me in Rochester.

A couple months and multiple states and countries later, I finally broke it out. It was worth the wait. 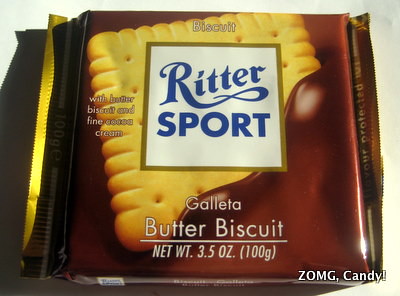 Believe it or not, this was the first Ritter Sport bar that I’ve ever tried. Somehow I just never picked them up in the course of my candy blogging duties. I think it’s because they look smaller, even though they’re really not (100g is pretty standard for a chocolate bar). They look smaller and squatter because they’re thick.

The Butter Biscuit is a “butter biscuit with fine cocoa cream”. It smells wonderfully sweet and fruity, with just a hint of cocoa undertone. The mix is so intoxicating that I’m smelling my last 1/4 of the bar as I’m writing this, and I want to chomp into it again (but I won’t because I’ve already brushed my teeth and it’s past my bedtime). 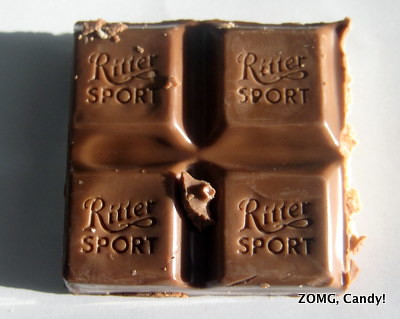 The square bar is subdivided into 16 smaller squares, each with the Ritter Sport logo imprinted on it. It’s a milk chocolate bar, and it got a bit soft in the summer heat, which is why it looks a little wonky and warped.

The bar is actually comprised of three layers. The base is a thick layer of milk chocolate. Within the square of the base is a smaller square of buttery biscuit (cookie) that doesn’t quite reach the edges of the chocolate, and atop it all, making up the bulk of the subdivided blocks, is the cocoa cream. 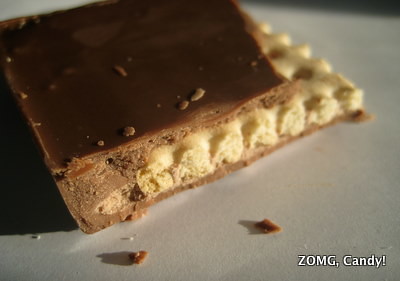 The cocoa cream is a paler shade of brown – almost greyish – than the milk chocolate base and shell. I can’t distinguish its flavors from those of the chocolate, which has lovely caramel notes and a tinge of fruity sweetness to the finish. I think it’s mostly a mouthfeel thing, as the chocolate as a whole feels more buttery than expected.

The biscuit (cookie) layer is a substantial 1/2 cm-ish. It packs a big crunch and tempers the sweetness of the chocolate. I don’t notice that it adds much in terms of flavor, though it does have a weird grassy finish when eaten in isolation. I do not recommend eating the biscuit in isolation.

Despite the slight cookie weirdness, this guy was goood. If you eat more than a few squares at a time, it does gets too sweet. I ate it a manageable 2 squares at a time and give it a hearty OMG. I would most definitely buy it again, except that I now have to eat my way through the rest of the Ritter Sport oeuvre. From the looks of it, that’ll take a while.