Back when I reviewed the Qra Qra Lemon, I pointed out the weirdness of the name. The Qra Qra Milk sees the Lemon’s unpronounceable Qras and raises it an inexplicable flavor. What exactly is a milk flavor, any way? 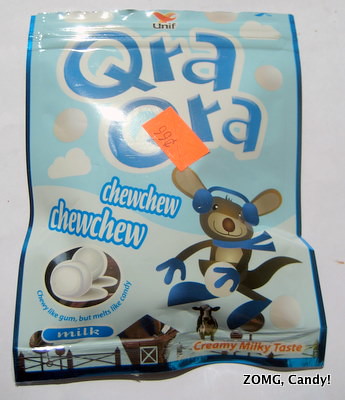 Milk flavored candy is actually a common find in Asian markets (I’ve reviewed a hard milk candy in the past), and I usually find them quite enjoyable. But chewing on milk? I dunno…

The Qra Qra did not taste like vanilla. Instead, it tasted of cooked milk, like the skin that forms when you heat up milk, with maybe a bit of coconut milk to it as well. It was almost savory and had a hint of salt in the finish. 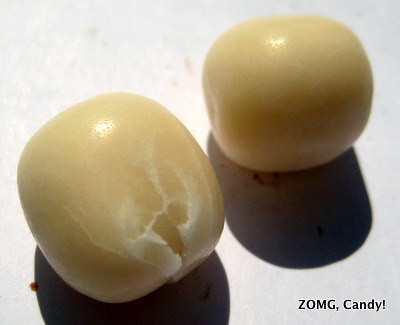 While the Qra Qra milk was still quite chewy (chewchew chewchew), it wasn’t as long lasting as the lemon. Despite its chew-time advantage, the Qra Qra Milk did not disappear nearly as quick as its lemon counterpart did. I was torn between giving them an O or a — and ultimately settled on an O. While they’re not bad, they’re also not really good, but they are intriguing, so a bonus letter point there.