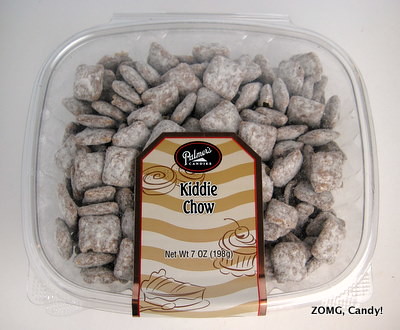 The Kiddie Chow came in a generous 7 oz. tub. I’ve made Kiddie Chow before, though I knew it as Puppy Chow. It’s called that because it’s made from kid and puppies!

Not really. The treat is a combination of Rice Chex cereal, melted chocolate and peanut butter, and powdered sugar.

The rice cereal made a nice, crunchy base that added a toasty flavor to the confection. Most of the pieces of the treat remained whole squares, though there were many misshapened nubs of broken cereal that still got completed covered in chocolate and powdered sugar. 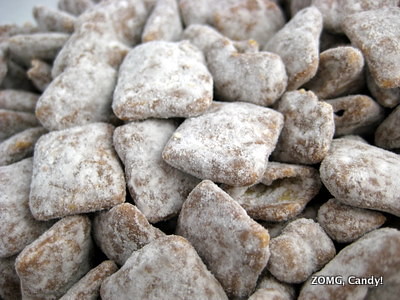 The chocolate flavor was so mild as to be nearly non-existent, more that of muted cocoa powder. Alas, while the ingredients list included cocoa powder, it also included palm kernel oil, presumably as a substitute for true cocoa butter.

Similarly, the peanut butter flavor was just that of a mild nuttiness. The ingredients list revealed “partially defatted peanut flour.”

The powdered sugar was the dominant flavor of the treat. It added an intense sweetness that the chocolate and cereal could only partly temper. 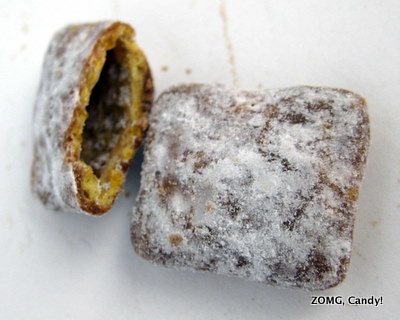 I enjoyed the treat, but the overwhelming sweetness of the powdered sugar became cloying after a while. An OM if you can manage to eat just a few in moderation, before they get too sweet.

I was tempted to downgrade them to an O for the cloy, but I found myself grabbing a few, a few times a day, until the whole tub was gone. That does define “revisiting” so the OM stands.