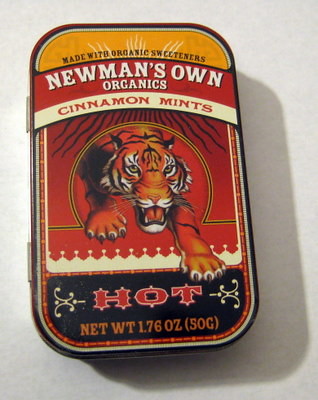 Disclosure alert: These mints were samples sent by Newman’s Own.

I love the packaging on these Newman’s Own mints. They took the Altoid’s-like tin we’re used to and made it more exciting with the old fashioned circus advert. The top of the tin informs you that they’re made with organic sweeteners.

My first thought on opening the tin was, “Well, they certainly look organic. Instead of the bright pink Altoid’s cinnamon mint color, the Newman’s Own mints were a brownish-yellow that made them look quite wholesome and free of refined sugar. 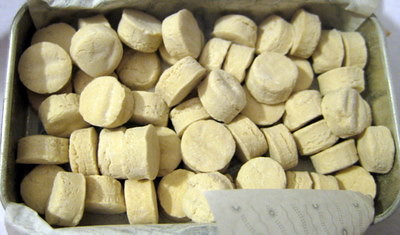 The mints do, in fact, have a darker sweetness to them, as if they were made with molasses or brown sugar instead of refined white sugar. In other words, they taste as natural as they look. Unfortunately, they also taste rather unpleasant. The cinnamon flavor is present, but it’s too light to have any breath freshening properties. And the aftertaste! Ugh! The mints made me feel like I had just swallowed some nasty cough syrup or ginseng medicine. And while the cinnamon flavor was too light to linger as a mint’s flavor should, that medicinal aftertaste was stuck in the back of my throat and would not go away.

I left these in my common room, hoping that one of my nine suitemates would find them appealing, and they’re no longer where I left them, so someone either slipped them into her purse or threw them out. I’m just glad to be rid of them. An O, coupled with a wish that I had a lower ranking that I could assign it.

Up until I read this NY Times article, I'd never expressed any interest in visiting Wisconsin. Now it's a definite...