I’d read about Nestle Smarties on candy blogs before (Cybele has a nice Smarties v. M&Ms post, and Candy Addict wrote about them as well), and I’d even eaten a few in lab (before the days of M&Ms colorworks, Smarties were apparently better suited as food rewards), but it wasn’t until I got to England that I finally got to have the full Smarties experience.

If you haven’t realized by now, UK Smarties are a far cry from the Smarties you can buy in the US, which can lead to confusion in candy novices. While US Smarties are compressed sugar candies (I’ve previously reviewed the Giant version), UK Smarties are chocolate candies in a panned sugar shell, like M&Ms.

Nestle Smarties, however, differ from M&Ms in a few key areas. Most importantly, the orange Smarties are lightly flavored. I always save my blue M&Ms for last because they are my favorite, even though I know that M&Ms all taste the same. I just like the blue ones better and have had to defend myself to many a perplexed friend. In the case of Nestle Smarties (which recently brought blue back; they had dropped it when they stopped using artificial coloring but then found a natural blue in cyanobacteria. Yum?), the blue doesn’t actually taste blue. Only the orange one tastes like anything (orange; duh), but at least people can’t say, “But they all taste the same!” about Nestle Smarties. 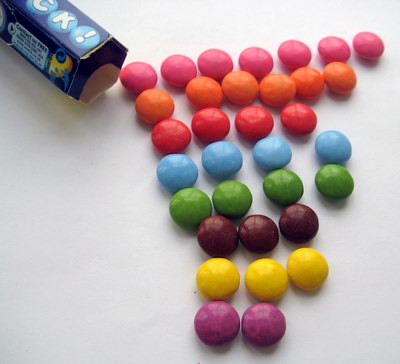 Nestle Smarties are also thinner, flatter, and more irregularly shaped than M&Ms are. They also have a more muted color scheme, possibly due to their use of natural colorings, and the coloring is less evenly distributed, causing some Smarties to look lightly mottled. Finally, Nestle Smarties have much thicker shells than M&Ms do, which mutes the chocolate flavor a bit.

Smarties, like M&Ms, also come in a mini form. Also like mini M&Ms, they’re a popular ice cream topping. My roommate, who spent her summer in Uganda, brought me a Smarties bar, which is basically the Smarties version of an M-Azing bar – mini-Smarties in Nestle milk chocolate – that was decent for a mass milk bar. Overall, I still prefer M&Ms to chocolate, just because I like the thinner shell, but there was nothing offensive about the Smarties. A solid O.