I saw a box of Michel Cluizel’s Champignon truffles at Cafe Moka in the Houston airport but didn’t buy them because they were so pricey. It was a choice I regretted. Thankfully, Viva Chocolato opened in Austin, and they carry lots of truffles by Michel Cluizel, including Les Champignons. Hooray! I bought one of the Champignons and a 99 Cacaoforte (the first and fourth in the lineup).

Les Champignons (French for The Mushrooms, by the way) are gorgeous and adorable. The cap is made of chocolate and filled with a crunchy toffee-like almond nougatine. It’s sweet and delicious. The stem is made of a soft, sticky, and super chewy caramel surrounded by white and dark chocolate. The caramel itself is not terribly sweet and instead tastes strongly of butter. They get an enthusiastic OMG, with a letter off for being so pricey.

I was nervous about trying the 99 Cacaoforte because they are made of 99% cacao. I’ve tasted a 100% cacao bar from La Maison du Chocolat (it was bitter, creamy, and good, but I could only handle a tiny bit at a time), and I’ve eaten raw cacao nibs before. Neither were entirely pleasant tasting adventures, so I was afraid the 99 Cacaoforte would be too much for my palate to handle. 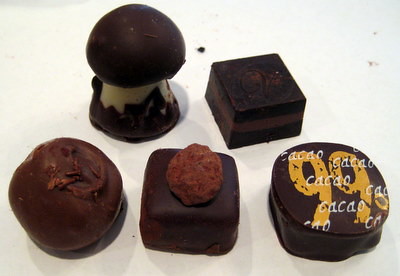 The truffle was super dark, of course, but surprisingly enough, I didn’t find it bitter at all. It certainly wasn’t sweet, but it was far more palatable than the pure cacao I’ve tasted. The ganache was super smooth, thick, and almost paste-like. It had no grain, but it wasn’t exactly creamy, probably because there should be no milk or cream added to the ganache. It tasted of smooth, pure cacao, and it was splendid. I found it sophisticated, intense, and ZOMG!-worthy. Next time I come across one of these, I’m definitely splurging again, as it’s worth every penny.

Edit: According to Sera, I was misinformed about the nature of the Cacaoforte. The enrobing is 99% Cacao, but the filling is a ganache made with the 99%, meaning that there is cream in there.