These Meiji Meltykiss were picked up on my trip to China. They came in lots of different flavors, but I only picked up two varieties because they were pretty expensive for China (~$5-6 box). I went with coffee and black sesame because they sounded the most delicious and intriguing.

The Meltykisses came in impressive packaging. The outer cardboard box had a perforated flap that opened to turn the box into a serving piece. Conveniently, that flap that could be easily, repeatedly resealed with just a slight touch. Why can’t my cereal boxes do that? 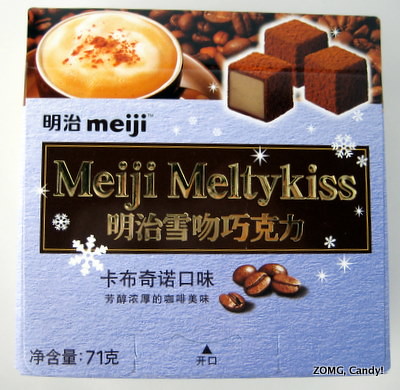 Inside, the Meltykiss cubes were individually wrapped in pretty checkered foil wrappers. Coffee’s wrapper was blue. A strong coffee scent flooded out as soon as I tore the wrapper open.

The coffee Meltykiss was like a little cube-shaped truffle: a tan center with a thin milk chocolate coating. The texture wasn’t as smooth and melty as the name had me imagine. Instead, it had a bit of a grainy crumble when I bit into it before then melting in my mouth. 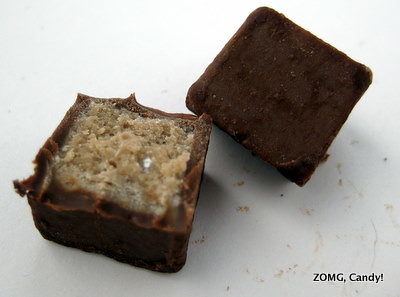 It tasted mostly of cappuccino/frappuccino – a sweeter, milder take that bypassed the deeper roasted flavors of unadulterated coffee. Still, it was quite tasty, if a bit sweet, with an appropriately bitter finish. An OM. 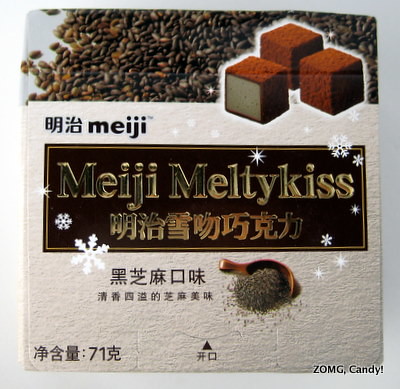 Black sesame came in a sea green and brown checked wrapper. Its composition was similar to that of the coffee version, only the inside filling was a purply-grey studded with black flecks (below right). 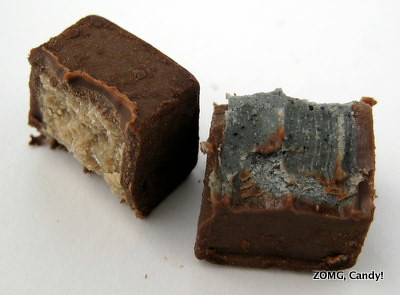 I was initially surprised at how well the milk chocolate went with the nutty, roasty, slightly bitter sesame. Then I remembered Hedonist’s delicious sesame bark, and it all clicked.

I loved how the savory black sesame mingled nuttily with the sweet cocoa. Sesame and chocolate are a stellar combination that should really be featured more often. It gets an OMG.

On the one hand, I regret not buying more boxes and more varieties of Meltykiss. On the other hand, it’s probably good that I don’t have too many of these addictively delicious fatty truffles hanging out in the house.