My friend Neil sent me this photo of a billboard that he took in Bremen, Germany. 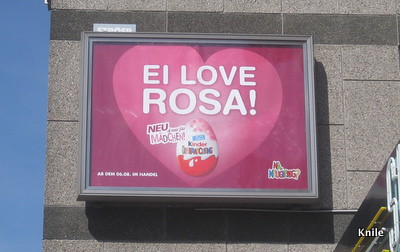 Clearly Kinder is trying to suck up to me, all the way from Germany!

Okay, maybe not. As best as I can tell, Kinder Surprise is now promoting special pink eggs with girly toys. I don’t love the idea that girls only like things that are pink, and some of those toys look body dysmorphia promoting, but at least they’re recognizing that little girls are a consumer base as well.