My Mars Delight came from Economy Candy, I think by way of Germany or France? The wrapper read, “Überraschend knusprig, lecker cremig. Étonnamment croustillant, délicieusement fondant.” I haven’t taken French since first semester freshman year, but I believe that the French sentence roughly translates into “Surprisingly crunchy, deliciously made.” And the Mars Delight is indeed delicious and crunchy. And delightful (yeah, I went there).

This bar comes in two pieces, like a Twix. I think the scalloped design is quite pretty. The chocolate is super sweet, but isn’t cloying. It’s European, so it’s Cadbury’s style chocolate – milky and creamy. 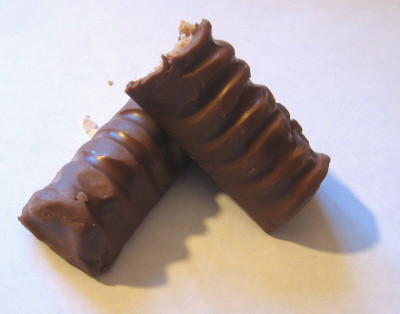 The inside crunchy portion is gorgeously folded on itself. Look how pretty that is! Its texture reminds of that of an egg roll – the flaky sweet kind, not the savory deep fried, often served with Chinese food lunch specials kind. However, unlike an egg roll, which has its own taste, the Mars Delight crunchies didn’t taste of anything themselves. However, they did serve to mitigate the sweetness of the chocolate coating and ganache/truffle layers inside. 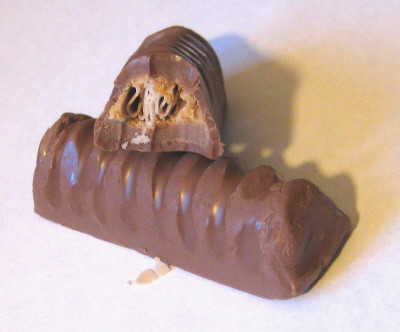 Speaking of that truffle/ganache layers, yum! According to the website, it looks like the top one is caramel, while the bottom one is milk chocolate. I couldn’t really make a taste distinction there, but it was all rich and good! I give the Mars Delight a OMG. If only they were as widely available here as they are overseas!