I was in Madison, Connecticut a few weeks ago for a band event, and I had the chance to stop at Madison Chocolates, a local chocolate shop run by Chef Paul Staley, a C.I.A. (that’s the Culinary Institute of America, not the Central Intelligence Agency) grad and former high end pastry chef. His shop sells truffles, “magical confections”, chocolate bars, and molded chocolate “lollipops”.

My friends and I picked up two boxes of truffles at Madison Chocolates, one of 6 as a thank-you gift, and one of 4 as thank-you reward for ourselves. Because he was awesome, Chef Staley threw in 2 extras without telling us until he finished wrapped up our order, so we actually walked out with 12 truffles.

The truffles come in these gorgeous gold boxes tied with a ribbon that says Madison Chocolates, a wonderful touch.

Here’s the box we bought for other people: 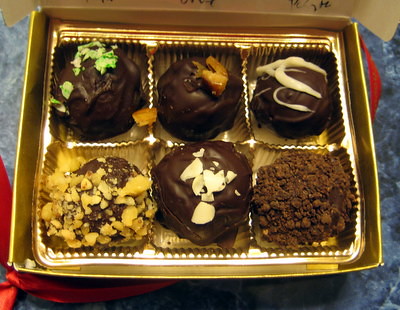 Clockwise from top left, I believe it’s pistachio, Grand Marnier, passion fruit, Barbados rum, one I can’t remember, and either Hazelnut Frangelico or Amaretto. I wrote them down somewhere, but I was out of town and travelling, so who knows where that somewhere slip of paper ended up. I didn’t get to taste this box, but the people who got to eat them in front of me made pretty extreme, bordering on inappropriate yummy noises.

Here’s the box I got to taste: 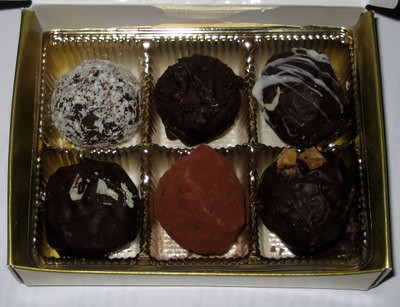 Clockwise from top left, they’re coconut, Barbados rum (I think), passion fruit, Grand Marnier, Mayan-Aztec, and the same unidentifiable truffle that was in the last box. I had a hard time identifying the second and sixth one because we had our truffle tasting party a couple of weeks after we bought these (unideal, I know, but it was hard to coordinate busy college students’ schedules to find a mutually agreeable tasting time), so they were refrigerated, which probably dulled some of the fresh truffle taste, especially in the ganache fillings. They were, however, still deliciously decadent.

The coconut truffle was enrobed in a dark chocolate with light coconut flavors. The milk chocolate ganache inside was creamy and was so deep that I thought it was actually dark chocolate (the I got light caramel notes instead of coconut, but again, long term refrigeration issues, maybe.

The Barbados rum (I think; that flavor isn’t listed on the website or in the pamphlet I picked up, but I know there was a rum flavored truffle of some kind) didn’t taste like rum to me. That could be because it wasn’t the rum one after all. Still, the dark chocolate ganache was rich, creamy, and, like all the other Madison chocolate truffles, melted away beautifully in the mouth.

The passion fruit had a great dark chocolate coating and a wonderfully creamy white chocolate filling. I’ve had actual passion fruit in Brazil (maracujá), and I didn’t get any noticeable specifically passion fruit flavor, but it was lightly fruity and lovely.

The Grand Marnier was easy to identify visually because it was topped with candied orange rind. It was also identifiable because it smelled quite strongly of orange. I was nervous about the orange flavor veering into Terry’s Chocolate Orange territory, but no worries there. The orange flavoring in the dark chocolate ganache was subtle and just right.

The Mayan-Aztec was a chili truffle that definitely didn’t suffer from refrigeration. Unlike the others, this was rolled in bittersweet cocoa powder instead of being enrobed in more chocolate. It had the perfect slow chocolate chili burn that was noticeable without being painful. I liked this one better than the Mexican chili truffle I tried at Whole Foods. Chef Staley’s version packed a kick that grew, lingered for a few seconds, and faded beautifully.

Finally, the unidentified truffle was a white chocolate ganache coated with dark chocolate and topped with white chocolate shavings. It didn’t match any of the truffle descriptions on the web site or in the pamphlet, so I have no idea what it is. I usually don’t enjoy white chocolate much, but it was good in this truffle. I should also note that this truffle was the only one in which the ganache wasn’t perfectly smooth – it had a slight grain to it, but I probably noticed it only because I was tasting it very, very carefully in my ultimately futile attempt to figure out what flavor it was.

These truffles have earned my rave review of a ZOMG! designation. If I ever find myself in Madison again, I will be sure to pay homage to Chef Staley and his little chocolate shop. There are still several varieties of his truffles that I have yet to taste, and I still haven’t had any of his truffles fresh, the way they were meant to be enjoyed.