On Wednesday, I covered Madécasse Chocolate‘s Pink Pepper & Citrus bar. They make bean-to-bar chocolate in Madagascar, which, in addition to paying their cocoa farmers a fair price, generates 4 times the impact of Fair Trade.

Today, I’m writing up their Sea Salt & Nibs bar, which brags that it was Best in Show in the Paris Salon du Chocolat. As far as I’m concerned, it was a well-deserved award. 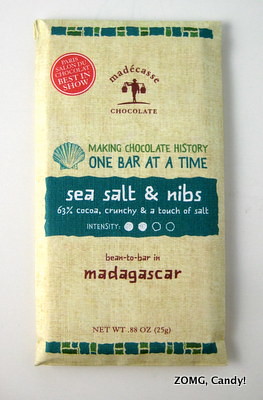 The Sea Salt & Nibs was “63% cocoa, crunchy, & a touch of salt”, with 2/4 dots on Madécasse Chocolate’s intensity scale. It was formed in the same mold as the Pink Pepper & Citrus bar, except its back was covered in tiny bits of cacao nib. 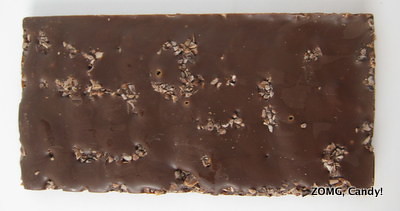 The chocolate had a softish bite with a light crunch from the nibs. They added a great cocoa depth without any of the bitter astringency that sometimes comes with cacao nibs. 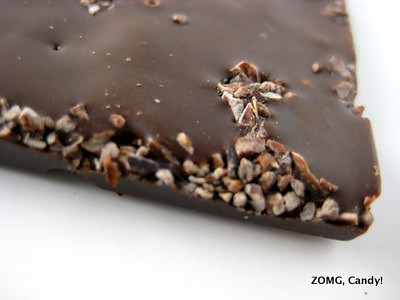 The chocolate was intensely flavored. It started off mellow with a caramel cocoa depth, then took on powerfully bright citrus and cherry notes.

Every once in a while, I caught a crunchy crystal of sea salt. The salt brought a brief flash of saltiness while highlighting the fruity notes in the chocolate. 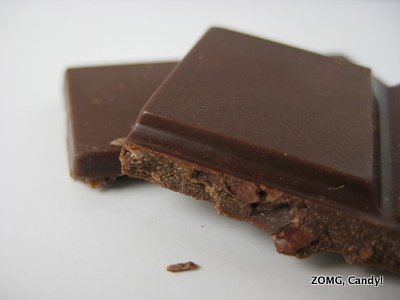 This was another tremendous bar from Madécasse. As corny as it sounds, every bite took me on a flavor adventure.

I am 100% sold on this brand and will be buying more bars the next time I’m at Whole Foods. A ZOMG!