The Lovely Candy Company was a new (founded this year!) candy company that made its debut at Sweets and Snacks last month. They make gluten-free licorice, caramels, and fruit chews (gluten-free was a continuing trend from 2012 to 2013), and I grabbed a couple of free samples of their caramels for review.

I got one Original Chewy Caramel and one Chocolate Swirl Caramel. The samples that I got were loose, so the photos of the packaging shown here were from Lovely.

Both caramels were wrapped in wax paper. They were soft and sticky, and a few bits of caramel got left behind on the wax paper upon unwrapping. 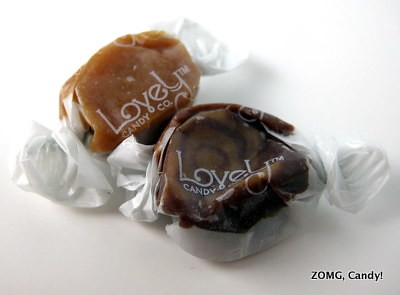 The Original Chewy was a pretty golden brown, and it was indeed chewy, with a small amount of teeth sticking. They tasted sweet with a slightly fruity sour tinge to it.

The flavor was quite similar to that of Brach’s Milk Maid Caramels, more on the sweet and buttery side rather than the scorched and bittersweet. I prefer the latter type of caramel, but if you like the former, these make a nice alternative to Brach’s that’s with better ingredients. 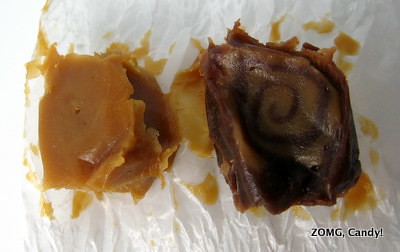 The Chocolate Swirl was a pretty swirl of the Original golden brown and a darker cocoa brown. Its texture was similarly soft and chewy.

The Chocolate Swirl had a great cocoa depth of flavor. It didn’t taste of chocolate; it tasted of intense dark cocoa powder. I appreciated the deep cocoa complexity here.

The Original was nice, but I prefer my caramels with a darker complexity, so an O. The Chocolate Swirl, on the other, brought plenty of cocoa complexity, and they get an OM.