Today’s review is of chocolate mushroom cookies that I picked up in China. The brand name literally translates to “Good Friend”, but I labeled them “Little Friend’s Chocolate Mushrooms” when I uploaded the photos, so I’m not sure which is technically correct.

They were all over the place in Shanghai, so I bet that they may be available in local Asian groceries/Chinatowns. 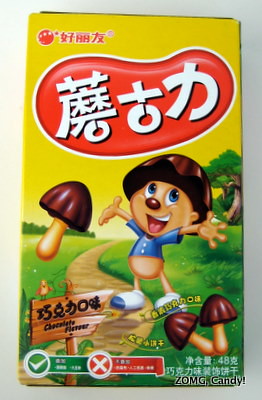 At any rate, these were definitely a cute confection. They were little mushrooms comprised of a butter cookie stem with a solid, fluted chocolate cap.

The cookie was nicely crunchy and very lightly, neutrally flavored. The cap in the pure chocolate version was milk. The chocolate was snappy with a lightly sweet and mild cocoa flavor, and its melt was creamy but not thick. 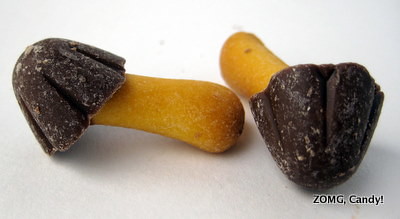 (They may look bloomed in the above photo, but they were actually just a little dusty/scratched from being all in a jumble together.)

While these chocolate mushrooms were fine, they were too mildly flavored and boring for me. I think Meiji’s Chocorooms are way better – Meiji’s version’s flavors are more intense, which makes the mushrooms addictive.

I’ve actually bought several boxes of Chocorooms, but I always eat them before I get around to photographing them for review. I was happy to share the remainder of the Little Friend’s Chocolate Mushrooms with friends, who eagerly finished them. They get an O. 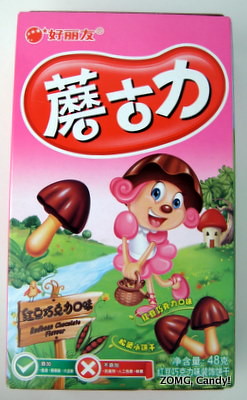 Little Friend’s also comes in a Redbean (sic) flavor, where the cap is chocolate plus red beans. I guess because it’s red beans, the mascot is a girl in pink instead of a boy in blue, though the chocolate cap atop her pink curls kind of makes her look like she’s in drag.

In China, red beans and green peas are common dessert additives. I’m not sure why, as I hate their mushy grittiness, and I feel that the vegetal earthy flavors of beans and peas don’t belong in dessert, but it’s just a cultural thing, I guess. 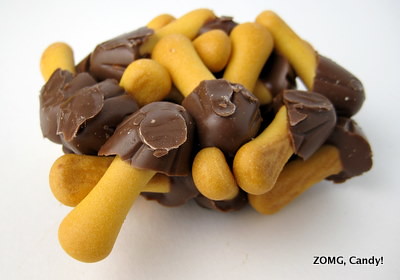 I found the red bean flavored mushrooms to be unpalatable. The caps tasted of the strong, savory earthiness of refried beans plus the blandly sweet cocoa of the chocolate, which to me just does not mix.

But my vegetarian roommate from New Orleans eats a lot of red beans, and she adored the red bean mushrooms, enough to polish off the box. So who knows – you may not feel like these warrant the — that I’m giving them.