A couple of weeks ago, I posted a review of Lily O’Briens crispy heart and sticky toffee. It was about as scathing as I get:

“From the two I tasted, a crispy heart and a sticky toffee, either Ireland has poor chocolatiers or Lily O’Briens is quite overrated.” 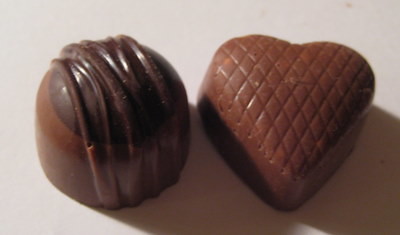 The next day, I got the following email from one of their representatives:

“I work for Lily O’Brien’s Chocolates and have read your comments on our two signature recipes with great interest. Our chocolates, when fresh, taste truly fantasti and the two recipes critiqued are among our chocolate fans’ favourites (check out the testimonials on our website from across the globe). Unfortunately I would suspect that the chocolates tasted we were past their best and should not actually be on sale still… I would be happy to send you fresh chocolates if you would like to critique them fairly.” 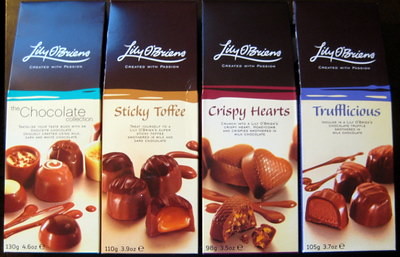 I was impressed that Lily O’Briens was so willing to stand behind their chocolates, and I was eager to take them up on their offer of a re-review. After all, I had bought the original chocolates from an Italian coffee shop in tourist trap Las Vegas, not exactly a place that would be worried about quality control and customer loyalty. When a generous package arrived from Ireland, and I happily ate my words, along with the chocolates they sent: one pouch each of their Chocolate Collection, their Sticky Toffee, their Crispy Hearts, and their Trufflicious (that name needs a noun, I thin), a two sets of their luxury bar assortments. This review is of the Chocolate Collection, which includes a sticky toffee and a honeycomb crisp (just like the crispy hearts, but not honeycomb shaped).

The Chocolate Collection, starting from the white chocolate cup going clockwise and finishing in the center, includes crème brûlée, hazelnut torte, honeycomb crisp, farmhouse ice cream, sticky toffee, lemon meringue pie, chocolat noir, and cookies ‘n’ cream. There was one of each and two of a few (the sticky toffee, the honeycomb crisp, and the chocolat noir, if I remember correctly), and I’m ashamed to say that over the course of a few days, I ate the entire pouch. What can I say; it’s that time of year when final papers are due and final exams are coming up. 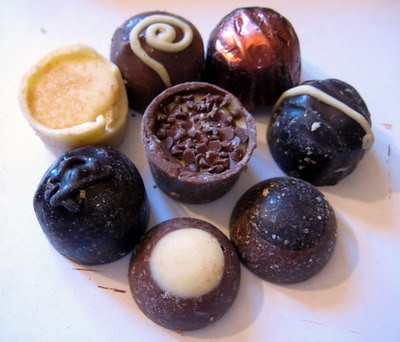 crème brûlée – White chocolate shell with granulated sugar sprinkled over a white cap; white chocolate ganache filling and a touch of caramel sitting in the bottom of the shell. I don’t particularly like white chocolate. Still, the cup is a cute design.

hazelnut torte – one of my favorites of the bunch, this one was quite nutty. Like most hazelnut/chocolate combinations, it was sweet, but this one managed to be just shy of overly so. The ganache almost had a slight grain to it from the hazelnuts. I liked the textural difference.

honeycomb crisp – honeycomb and crispies in milk chocolate that was soooo much better than the stale crispy heart I bought in Vegas. The chocolate was creamy and yogurty rather than brittle, and though it was still on the sweet side, the sweetness was more bearable when the chocolate melted heavily on the tongue. 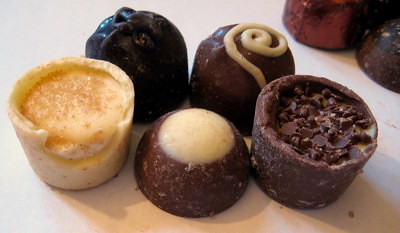 farmhouse ice cream – I also enjoyed this one, a dark chocolate shell around a white ganache. The ganache wasn’t white chocolate (I think). Instead, it tasted like fresh cream.

sticky toffee – the other one that I had originally panned. This time around in a fresh version, the “toffee” caramel was smooth and flowing with a slight butterscotch tinge. No grain and grit here. And again, the sweetness was helped by the proper melt of chocolate (whereas my Vegas ones were pretty brittle).

cookies ‘n’ cream – somehow, Lily O’Briens managed to get the a nice bit of cookie crumb grain into this one, a milk chocolate shell surrounding a white chocolate ganache studded with tiny chocolate chips. I was amused that there were actually more chocolate chips in the actual chocolate than in the photo of the chocolate on the box. Usually, it’s the other way around. This tastes overwhelmingly of white chocolate. I think I would have liked it better if it tasted more like the cream of the farm house ice cream.

So, Lily O’Briens, I owe you an apology. Your chocolates are tasty. They’re a little overly sweet for my palate, and the ganache fillings are almost on the greasy side, but I liked them enough to eat them all. Irish people do have good taste in chocolate. Hooray! An OM for the lot as a whole, with an OMG for the hazelnut torte and farmhouse ice cream.