I’m always on the prowl for candies I’ve never tried before, and when I saw the Lee’s Chocolate Mint bar on the shelf at Randall’s, I snapped it up, along with a Jaffa Bar, which I haven’t opened yet. I’d never heard of Lee’s, a Scottish based food maker, before, so I was eager to see what they had to offer.

The Chocolate Mint bar is billed as “a delicious mint creme fondant covered in real dark chocolate.” Immediately upon unwrapping the bar, my nose was invaded by a super strong, minty scent that reminded me of a York Peppermint Pattie. Unlike a York, however, the mint filling was hard – so hard that it was nearly impossible to break in half, a fact my friends all commented on when they tried to break apart the remainder of the bar to share it amongst themselves. With enough muscle, the bar does snap and cleanly cleave like a piece of toffee, except that toffee is brittle and much easier to break. Once it gets in your mouth, the fondant softens and becomes chewy in a grainy sort of way. 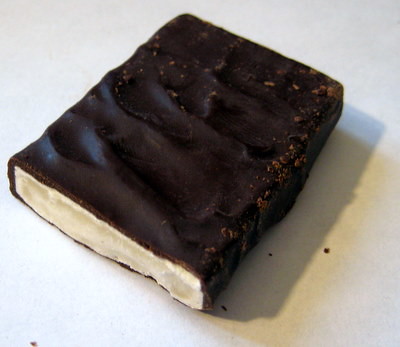 The mint fondant isn’t nearly as strong as it smells. Instead, it’s super sweet with a minty feel but without much actual mint flavor. The finish is sweet, and the fondant got stuck in my molars. The layer of “real dark chocolate” that coats the bar is thin, bland, and rather grainy. It might as well be fake, as there’s so little of it and it’s of such poor quality.

I’ll stick with York Peppermint Patties for now. Like the York, the Lee’s is quite low in fat (3 g total, 1.5 g saturated) and pretty reasonable calorie-wise (230 for the whole bar, which is so hard that you’ll be forced to eat it slowly), probably because the bar is mostly sugar. It gets just an O, but it was good enough to make me want to try the rest of the Lee’s line, though I do fear for my teeth a bit.

I usually don't finish the candy that I taste. Instead, I take a few bites and pass the rest on...