Sometimes, candy can come awfully close to being too cute to eat. Fortunately for you lot, dear readers, I am willing to sacrifice my cuteness sensibilities and chomp down on adorable candy, even if it happens to endearingly resemble frightened hippos. 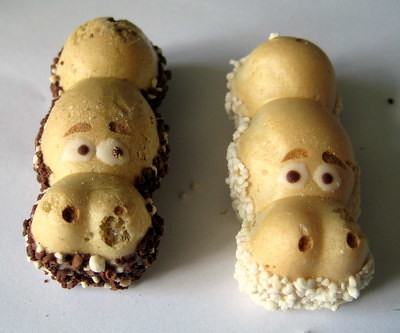 Kinder’s Happy Hippos, like nearly everything made by Kinder/Ferrero, is tinged with hazelnut deliciousness. The Hippos come in two varieties, cacao cream (left) and biscuit (right). Both varieties consist of hippo shaped wafers (complete with eyes, nostrils, and eyebrows) filled with flavored cream and half dipped in chocolate and sprinkles. They differ in that the cacao cream has, well, a cacao (cocoa) flavored cream, and while the Cacao Hippo can be found submerged in a lake of chocolate, the Biscuit Hippo’s prefers a lake of white chocolate. 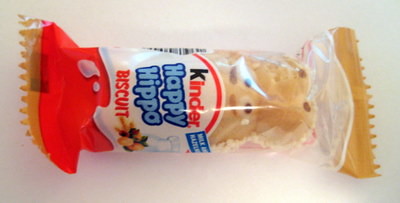 The wrapper of the Biscuit Happy Hippo shows milk and hazelnuts, and that’s what you get in lovely combination in this chap. The light wafer crunch of the Hippo stands in sharp contrast to the thick hazelnut and milk cream that fills its three pods – bum, head, and nose. The fillings are so thick and creamy that they’re moisture-suckingly good, even if the finish is rather cloying. 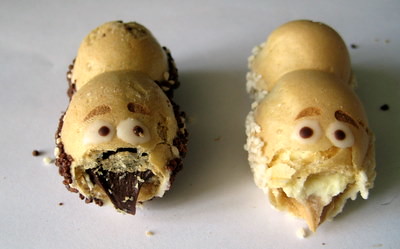 The wrapper of the Cacao Hippo calls the filling fat-reduced. Clearly, I should take that to mean that I can eat a bloat of Happy Hippos (yes, a group of hippos is called a bloat) and not have to worry about personally bloating from Hippo-related weight gain, right? There are two layers of cream inside, one brown that tasted of cocoa and one white that tasted of milk and vanilla. Online ingredients lists for the cacao cream Hippo lists hazelnuts in the ingredients, so the milk layer may have been the same as the filling of the Biscuit Hippo, but I didn’t taste any hazelnut in the filling of the one I got. The filling of the Cacao Hippo was thinner, which meant that it didn’t coat the mouth or cloy.

A ZOMG! for both because I am a sucker for chocolate and hazelnut things and cute things.