I once wrote that I’ve yet to meet a Ferrero product I didn’t like. As my Lily O’Briens experience showed, I’m not above eating my words. The Kinder Cereali bar was not for me. 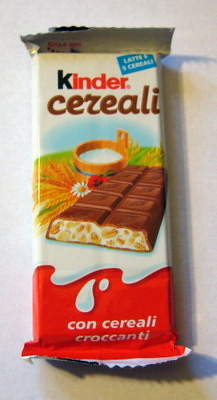 The packaging on my Kinder Cereali is all in Italian because I got it from my friend Andrew, who was lucky enough to spend his spring break in Italy. All expenses paid, I believe, as he is a geology major. There are few geology majors at Yale, so even undergrads get special treatment and get to do cool things and go on cool trips.

Unlike most Ferrero/Kinder products, the Kinder Cereali contains no hazelnut. Instead, it is chocolate-covered puffed wheat and a frosting-like confection. I guess if the wheat is supposed to be like cereal, the frosting is meant to approximate milk? If so, then this bar is reminiscent of those horribly processed Milk ‘N Cereal bars that General Mills makes. 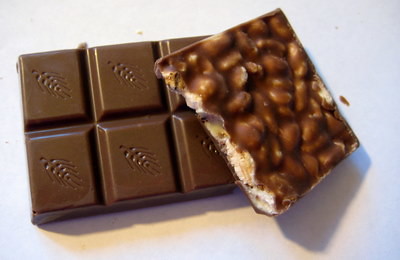 I love how the Cereali looked outside of the wrapper. It’s already tiny as it, more fun-sized than full-sized, and even still it’s neatly pre-segmented. And the little imprints of heads of wheat are a lovely touch that make the whole thing quite darling (can you tell I’ve been in England for a couple of weeks now?).

The puffed wheat was, for me, an unexpected taste sensation because it was different from the usual candy bar go-to of crisped rice. The wheat was similar to puffed rice, but with more texture and flavor. Think Smacks instead of Rice Krispies. The milky white frosting that surrounded the wheat puffs tasted blandly of blah vanilla frosting. Finally, the layer of chocolate that coats the whole thing is quite thin but creamy.

The Kinder Cereali wasn’t bad, exactly, but it wasn’t good either. It just kind of… was. And though the use of wheat instead of rice made it different, it didn’t really make it better. Just a non-negative, tepid O.