These Katjes YoguBerries were a Cost Plus World Market find. They’re a big gummi maker in Germany, and my bag was in its original German packaging. 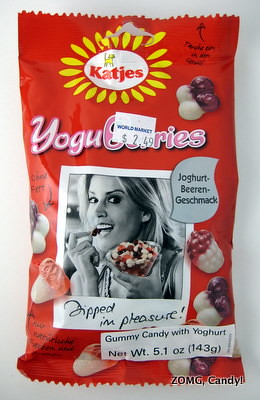 They came in three shapes and flavors: a deeply purple blueberry, a pale pink strawberry, and a red raspberry. All were half translucent coloring, half solid creamy yogurt gummi.

I didn’t immediately recognize blueberry as such. At first glance, I thought it was grape or cherry. The fruity portion started with a slightly plasticky edge before giving way to deep red notes. 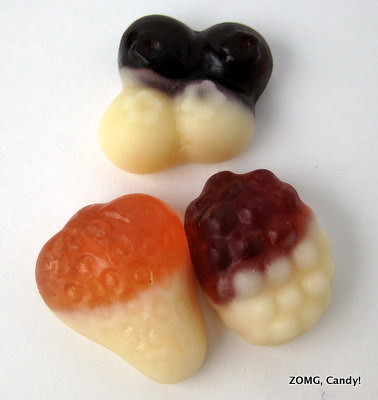 I didn’t recognize it as blueberry when I ate the colored portion by itself. When mixed with the yogurt portion, however, it tasted just like blueberry yogurt!

Raspberry’s fruity side started off sweetly before giving way to a slight fruity seediness. Unlike some artificial raspberry candies, this seediness was subdued and added genuinely raspberry-like finish to the treat. 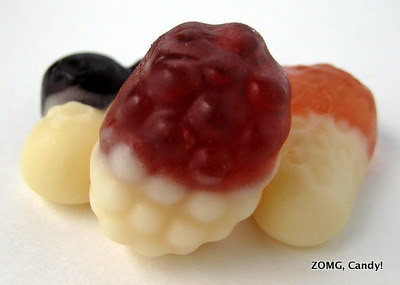 The yogurt portions of these gummis were all the same. They tasted almost savory with their dairy notes of creaminess and had an overarching sweetness. The texture of the yogurt gummis had a barely perceptible grit against the tongue, while the fruity portions were perfectly smooth. 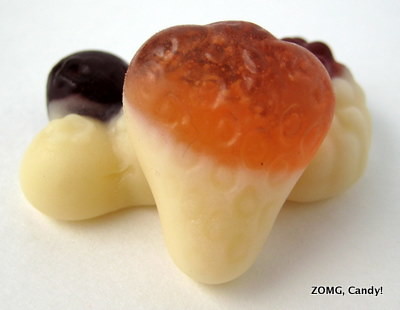 The gummis had a nice chew. It was similar to that of Haribo gummi bears but just a shade softer, with a great sproinginess.

I enjoyed the flavors and texture and found these to be far better than the Haribo yogurt gummis I reviewed about a month ago. An OM.

When I was in middle school and high school, we used to sell these little bags of Eiffel Bon Bons...